Air Canada is vowing another bankruptcy is not an option as it continues to battle an unprofitability streak and continued fallout from its ongoing labour strife and the closure of its main maintenance provider Aveos. Patience appears to be wearing thin as four years of losses continue to plague investors looking for an elusive return on investment. The airline is opting not to give any clear-cut timing for a return to profitability as it first needs to achieve new collective bargaining agreements with two remaining labour groups – pilots and mechanics – that have staged work stoppages that in the short term have further diluted its brand.

CEO Calin Rovinescu recently stressed to analysts the job of transforming the inefficiencies inherent in a legacy carrier like Air Canada. However, he remarked a return to profitability was certainly the objective and Air Canada was “not looking for an easy way out of this”, alluding to speculation that the carrier would be forced into another restructuring after emerging from creditor protection in 2004. Addressing that speculation directly Mr Rovinecsu states: “That is of no interest to me.”

Key to Air Canada’s return to sustained profitability is reaching labour agreements with the Air Canada Pilots Association (ACPA) and the International Association of Machinists and Aerospace Workers (IAMAW). It has concluded deals with the rest of its unions after all employees in 2009 agreed to concessionary deals that pulled Air Canada back from the brink of bankruptcy. Three work stoppages initiated by the ACPA and IAMAW in Mar-2012 and Apr-2012 forced Air Canada to cancel thousands of flights and the erosion in customer confidence pressured the carrier’s bookings. Rival WestJet declined to quantify the number of customers it has picked up as a result of the turmoil at Air Canada, but carrier management recently offered anecdotal evidence of passengers walking the wing to WestJet. Air Canada only posted a 1% rise in traffic during April, compared to an 8.2% increase at WestJet. 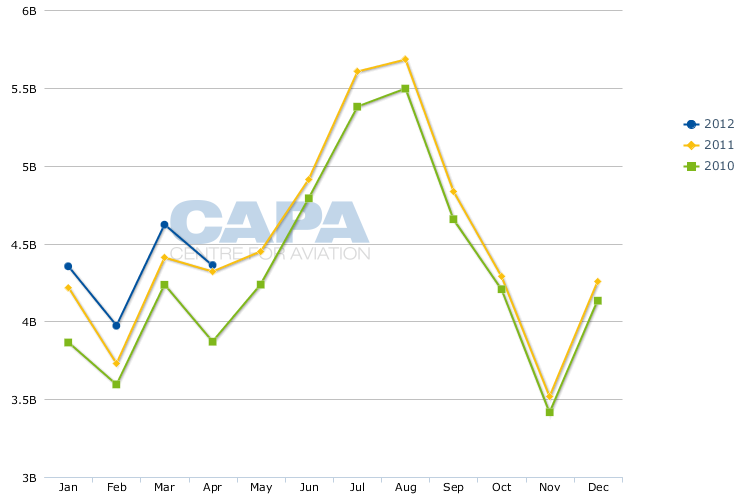 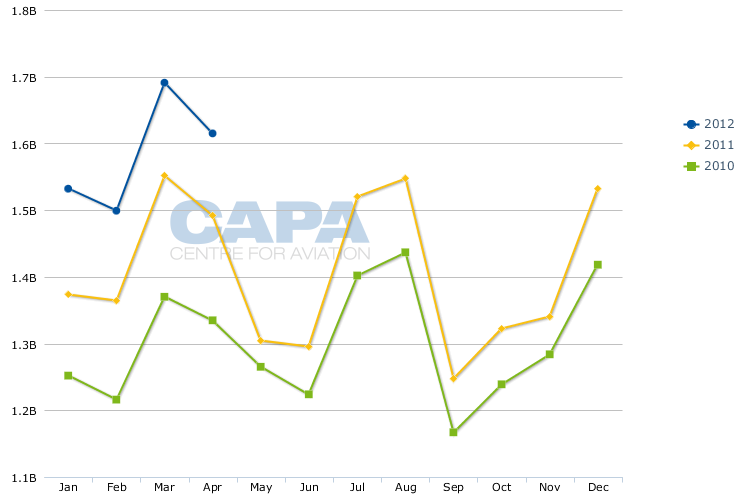 Air Canada has gone as far as blaming social media outlets for some of the labour turmoil. In attempting to explain why previous tentative agreements with pilots and machinists and ground workers were rejected by the broader membership, Mr Rovinescu remarked the union labour leaders were not able to get social media outlets under control, and the result was the creation of an opposition party within the union ranks that undermined union leadership recommendations. He noted a “tremendous impact” from the tentative agreements being quickly undermined on social media sites.

Fallout from the work stoppages at Air Canada earlier this year forced the Government to intervene, and legislation was crafted that created a process that essentially leads to a resolution imposed by arbitrators within 90 days. Under the process, Air Canada management and the unions will undertake a 10-day negotiating period, and if the two sides fail to reach an accord, within 90 days the arbitrators appointed will select either management or labour’s offers as the contract going forward. During the arbitration period, the pilots and mechanics and ground workers are prohibited from striking and management is not allowed to impose a lock-out. Management almost instituted a lock-out of pilots earlier this year as tensions intensified in contract talks.

If the Government sides with Air Canada and imposes the carrier’s contract on employees, it will only heighten an already high level of resentment held among employees by Air Canada’s management. Even if the 10-day negotiations produce agreements ratified by the two labour groups, it could do little to negate the confidence labour has lost in management during the last couple of years. Some analysts have pointed to employee comments that the relationship between labour and management is irreparable.

Mr Rovinescu dismisses that sentiment, noting great progress was made in changing the culture of Air Canada during the first two years after he returned to the carrier in the role of CEO. He admitted that progress had slipped during intense labour negotiations over the last year, and also stressed a number of Air Canada’s employees were completely turned off by the wild cat strikes. He concludes the labour-management relationship is recoverable, and stresses if that is not the case the carrier “does not continue the transformation mindset”.

Air Canada’s main goal in labour negotiations is to attain productivity improvements as Mr Rovinescu stresses the carrier aims to achieve deals that include favourable salaries. The carrier’s rival WestJet recorded a 13% rise in salaries and benefits during 1Q while Air Canada’s wage expense only grew 6% year-over-year. WestJet managed to grow its profits nearly 42% year-over-year and returned CAD27 million (USD27 million) to shareholders, which suggest Air Canada does need an overhaul of employee work rules.

Along with its labour strife Air Canada faces a CAD4.4 billion (USD4.4 billion) pension deficit driven by lower interest from investments that fail to fully fund the programme. Relief the carrier received in 2009 from funding its pension plans expires in Jan-2014, and unless further relief is granted the company could face annual payments of CAD500 million (US499 million) annually, according to estimates from Standard & Poors.

Air Canada estimates that if it attains similar hybrid pension schemes (subject to regulatory approval) with pilot and mechanics that it achieved with other labour groups, it could reduce the pension deficit by CAD1.1 billion (USD1.1 billion) and for every 1% increase in interest rates, the deficit could decrease by another CAD1.7 billion (USD1.7 billion). But those are all big ifs in attempting to fix a pension deficit that has essentially doubled in the span of a single year.

Air Canada still argues it did everything it could to thwart the sudden closure and bankruptcy of its heavy maintenance provider Aveos, and its latest actions could muck up the process of the MRO business being sold as a singular entity.

The carrier has reportedly asked to terminate its Aveos contracts, which the union representing Aveos’ employees has said would create difficulties in selling the company in its entirety and preserving the more than 2000 jobs at stake, according to The Globe and Mail.

Air Canada took a CAD120 million (USD119 million) write down on the Aveos closure in 1Q, and also was accused of not complying with a government regulation requiring the airline to have its maintenance performed in Montreal, Winnipeg, Manitoba and Mississauga in Ontario.

Mr Rovinescu remarked that despite a legal opinion delivered by Canada’s Federal Department of Justice that Air Canada was in compliance with the law, the Government of Quebec has filed a motion seeking a declaratory judgement that Air Canada has not complied with the law. The airline’s CEO stated the carrier will continue to defend its compliance in that proceeding.

As it works through thorny governmental compliance issues related to the Aveos closure, Air Canada will ultimately benefit as it seeks to broker new lower-cost long-term deals with new providers. Carrier CFO Michael Rosseau said the new deals would also usher in faster turnaround times for Air Canada, which would free up aircraft for the carrier. Air Canada has sent out request for proposals for the maintenance agreements with a preference for the work being performed in Montreal, Winnipeg, Vancouver and Toronto. The carrier has stated it cannot offer maintenance cost guidance for 2012 as it works to backfill the gaps created by the closure of Aveos. By 2013 Air Canada's average fleet age will reach 13.6 years, driven largely by its ageing Airbus narrowbodies, which will need costly heavy maintenance starting during the next couple of years. Even before Aveos closed its doors, Air Canada cited an opportunity to improve maintenance costs when its Aveos contract became renewable in 2013.

Meanwhile, bidders have until 29-May-2012 to submit their offers for the three business lines of Aveos: airframe, engine and component maintenance.

It does not appear that Air Canada will make a dramatic climb back to profitability this year. Standard & Poors expects the carrier to produce weaker earnings before taxes and appreciation for 2012 after its EBITAR fell by CAD190 million (USD189.4 million) in 2011. The ratings agency predicts Air Canada’s revenues will be negatively affected by labour disruptions and lower levels of booking for summer travel.

Air Canada has also made a recently puzzling move to exercise five options for Boeing 777 widebodies scheduled for delivery in 2013 and 2014 prior to the first 787 joining its fleet in 2014. Carrier management stated the airline may not actually ever take delivery of the aircraft, but stressed delivery slots were valuable in justifying the move. The aircraft are not listed on Air Canada’s forward fleet projections that show a year-end 2013 total of 205 mainline aircraft.

Some industry watchers believe Air Canada is somewhat hamstrung by outdated government policies that include foreign ownership limitations and high airport and air traffic control charges. But WestJet is also facing creeping airport costs as it increases its presence at Toronto Pearson International Airport, yet still generates a return for shareholders. Air Canada management argues it has not had the luxury of starting from a clean slate as it works to break the carrier’s legacy shackles.

While Mr Rovinescu heralded Air Canada’s success in recovering the increase in fuel costs and the carrier increased 1Q revenues by CAD209 million (USD208.4 million) to almost CAD3 billion (USD3 billion), its negative operating margin widened to 3% and its costs continue to creep. Robust revenue growth does little if high costs are not reined in. It is a dilemma Air Canada has not solved during the last four years and uncertainty remains over its ability to overcome that challenge.

Mr Rovinescu cautions the kind of transformation Air Canada is undertaking is not without “bumps in the road”. But Air Canada shareholders are ready for a smoother ride.