US airline stocks gained yesterday, a welcome change after the NYSE Airline Index lost approximately 14% of its value in the past two weeks on concerns of decelerating economic growth and a possible double-dip recession.

Air Canada (B shares up 3.8% yesterday): Reported a record system load factor of 84.7% in Jun-2010 on a consolidated basis with Jazz, for a 3.8 ppt load factor gain. The carrier also reported increases in traffic (RPMs) in all markets (the seventh consecutive month of year-on-year traffic increases on a consolidated basis) for a system traffic increase of 15.0%. Capacity (ASMs) increased 9.9% in the period.

WestJet (Shares up 0.3%): President and CEO of the Canadian LCC, Gregg Saretsky, commented that the carrier is “very encouraged” by “strong” load factors of 78.2% in Jun-2010 (a 5.3 ppt increase), despite “significant” capacity growth of 10.9% in the period.  While not providing actual passenger details, the LCC commented that it flew an additional 139,000 guests in Jun-2010 on a year-on-year basis.

US Airways (shares down 1.3%): US Airways reported a consolidated PRASM increase of approximately 22% year-on-year in the month, while total RASM increased by approximately 23%. The carrier handled 5.3 million passengers in the month (+1.5% year-on-year) with an average load factor of 85.4% (+0.2 ppts). Domestic passenger numbers represented 89% of the total (at 4.7 million passengers for a 0.4% increase).

Republic Airways (Shares down 4.9%):  Handled nearly 3 million passengers in Jun-2010, a 70% year-on-year increase (this figure is distorted due to the inclusion of Frontier Airlines and Midwest Airlines in 2010 data), as capacity (ASMs) increased 101%. Consolidated load factors improved 7 ppts in the period to 86%. Meanwhile, Republic’s Frontier subsidiary reported an all-time monthly load factor recover of 91% in Jun-2010, for the fourth consecutive month of record load factors. The carrier handled 1.4 million passengers last month, an 11% year-on-year increase. 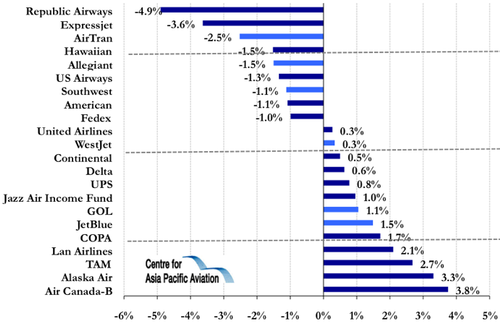