Air Canada announced it plans to launch a new discount carrier as a competitive answer to low-cost domestic rivals such as WestJet, Air Transat and Sunwing Vacations. The carrier hopes to use a fleet of up to 50 A319s and B767s for its new LCC venture, which will operate to sun holiday destinations in Mexico, the Caribbean and Europe.

The airline will not be used to replace mainland routes Air Canada considers financially viable.
Shares in WestJet were down 1.5% in trading.

Skymark Airlines announced plans to commence operations from Tokyo Narita International Airport in Nov-2011, becoming the first LCC to open a hub at Narita with four domestic routes under the name "Narita Shuttle". The airline plans to operate 25 daily services by Sep-2014 to nine domestic destinations. Skymark Airlines plans to expand its fleet of B737s from 18 to 27 by Mar-2013 to support the new routes.  Shares in Skymark fell 1.3% in trading. 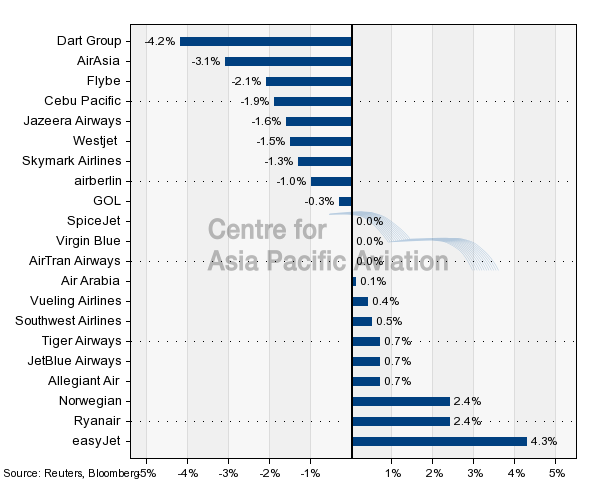