North and South American airline shares were mixed on Wednesday (24-Mar-2010), as the Dow slipped 0.5%, in response to a weak auction of US treasury notes. Investor concerns regarding a downgrade in Portugal’s sovereign debt by Fitch Ratings also affected the market. Oil prices dropped 1.6% to USD80.61. The AMEX Airline Index ended trading down only 0.1% as a result.

Air Canada (+6.4%) continued to gain on Tuesday, after CFO, Michael Rousseau, stated during trading that the carrier plans to exceed the CAD500 million (USD490 million) in cost reductions and new revenue-generating activities it has targeted by the end of 2011. Air Canada has so far reduced costs or generated new revenues totalling CAD223 million (USD218 million) in 2010, with the carrier having a target of CAD270 million (USD264 million) in the year. The carrier added that it has no plans to reduce capacity to help improve cash flows.

Competitor, WestJet was meanwhile flat, despite new CEO, Gregg Saretsky, stating the carrier expects to have 45-50% of the Canadian domestic market within two to four years, up from its current 38% share. To assist with this growth, the carrier plans to expand its fleet to 135 aircraft in 2016.

WestJet has also seen a small improvement in cross-border travel volumes, which Saretsky attributed to the strength of the Canadian dollar. The LCC also stated it is yet to decide when it will resume service from Toronto to New York’s LaGuardia Airport if the DoT approves Delta Air Lines and US Airways plan to award landing slots to a number of LCCs, as part of a realignment strategy. The carrier has 24 months to use the new slots, if awarded. WestJet previously launched New York services in 2005, but was forced to suspend services after failing to acquire peak hour slots.

Copa Holdings (-1.6%) fell despite announcing Corporacion de Inversiones Aereas (CIASA), sold 1.84 million of its Class A non-voting shares of Copa Holdings in an SEC-registered equity offering. CIASA sold the shares of Class A common stock at a price of USD56 per share, resulting in proceeds of USD99.9 million.

Bethia SA will meanwhile acquire the remaining 8% stake through a USD426 million purchase of a majority stake in Axxion from current controlling shareholder, Inversiones Santa Cecilia. The Cueto family will maintain the majority stake in LAN. LAN Vice President, Enrique Cueto, stated Bethia’s ownership of a stake in the carrier “means no changes for the airline”.

America Airline Daily reports the very latest on what’s happening in the US, Canadian and Latin American aviation markets. Other reports featured in today’s issue include: 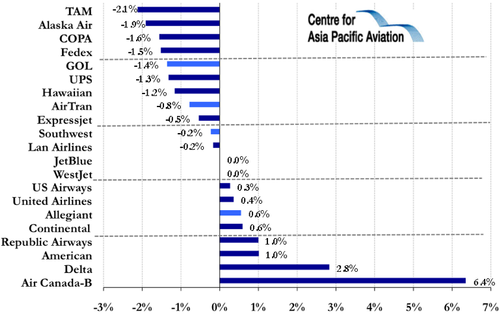