North and South American airline shares fell for a fourth consecutive day on Tuesday (25-Aug-2010) on continued concerns the recovery in the US economy is slowing, following disappointing US housing data. The Dow (-1.3%) declined as a result.

The AMEX Airline Index was down 2.0% for the day, despite oil prices (-2.1%) continuing their recent descent, ending trading at USD71.63.

Air Canada’s (-0.9%) decline for the day was minimised by comments from Citigroup Global Markets analyst, Will Randow, that the carrier’s stock could “soar” in the next few years if it continues to show signs of stabilising. Mr Randow stated the stock could reach CAD13 in the future, up from the group’s current price target of CAD4. Air Canada ended the session at CAD2.17.

AirTran (-3.5%) also declined. CRT Capital Group stated during trading that the LCC’s plans to increase its checked-luggage fee by USD5 from 01-Sep-2010 should help it improve its bottom line. Analyst, Michael Derchin, stated that if half of AirTran’s roughly 25 million passengers p/a check baggage, the additional USD5 per passenger would add approximately USD62.5 million to its ancillary revenues. Mr Derchin stated this would add USD0.23 per share to AirTran’s earnings for 2011, assuming a 35% tax rate.

US carriers to raise fares for autumn

Farecompare.com CEO Rick Seaney stated during trading that US carriers are expected to raise their fees and fares this autumn as demand recovers from the 2009 recession. Mr Seaney stated fares for domestic services are 16-20% higher than they were in 2009.

Elsewhere, Delta Air Lines (-4.9%) was the biggest fall of the day, followed by Hawaiian Airlines (-4.0%) and United Airlines (-3.6%). Expressjet was the only carrier not to decline for the day, remaining flat. 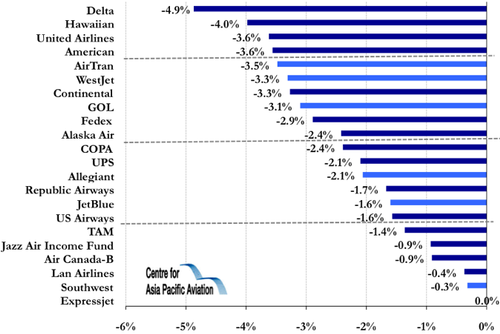