Air Canada only gainer, US airline shares fall - some heavily

US carrier shares fell yesterday (10-Aug-09), with the Dow (-0.34%) ending the day down. The fall ended Wall Street’s strong recent rally, as investors booked profits ahead of a number of economic reports out this week, including the Federal Reserve’s report on interest rates and the economy, and US Government monthly retail sales data. Oil prices also eased, to USD70.60 a barrel.

On the other hand, the Brazilian market gained, with the Bovespa (+0.9%) continuing its rise. According to BlackRock Inc, Latin American markets remain the most “attractively priced”, with Brazil being one of the most “notable” equity markets, due to its economic growth potential. However, Gol shares (-0.6%) fell ahead of its announcement of financial results on 12-Jul-09. The fall followed an 11.8% gain the previous day, following positive load factor results. TAM (-2.4%) shares also fell.

Meanwhile, Southwest (-2.6%) fell, ahead of its announcement of plans to submit a bid of over USD170 million for Frontier Airlines, while the other bidder, Republic (-4.9%) also fell on the news. Allegiant (-5.7%) had the largest fall of the day on reports the carrier’s share price may be headed for a decline.

Air Canada-B (+1.6%) was the only gainer on the day, despite a fall by the TSX (-0.8%) as Canadian investors responded in the same way as US investors. Analysts warned investors to remain cautious about the carrier, with five of the nine analysts covering its stock retaining a “hold” rating for the carrier. According to Versant Partners the carrier’s balance sheet “remains fragile” and could be “pushed back to the brink if fuel prices rise back to the levels of last summer or if air travel demand does not rebound or worsens for some unforeseen reason.”

The carrier announced on Friday (07-Aug-09) plans to make further cost reductions of up to USD500 million. However, Versant Partners stated the carrier will not only have to create additional cost savings to survive, but also have to change its company culture to remain viable in the long term. 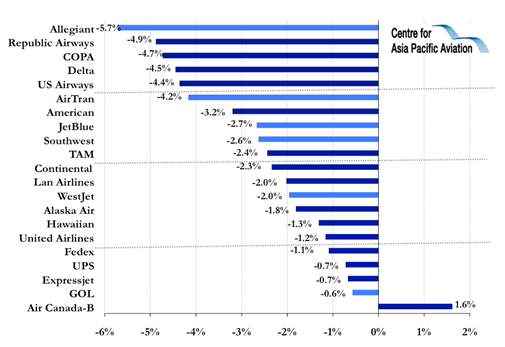