In the wider market, the Dow (+0.4%) was up, led higher by analyst upgrades of blue chip companies. However, gains were weakened as investors remained cautious ahead of the release of Feb-2010 employment data on Friday (05-Mar-2010).

Republic Airways traffic up following acquisition of Midwest and Republic

Frequent flyer programme, Groupe Aeroplan, reported a net profit of USD19.7 million for the three months ended 31-Dec-2009, compared to a net loss of USD1,033 million in the previous corresponding period. However, operating profit was down 38% year-on-year, to USD62.7 million.

For FY2009, the programme reported a net profit of USD85.9 million, compared to a net loss of USD928.1 million in the previous corresponding period.

Hawaiian Airlines (-1.5%) CEO, Mark Dunkerly told MarketWatch during trading he expects the carrier will be able to stay on track with its long term growth plan, stating conditions are likely to continue to improve this year, after a reduction in fares last year resulted in a 10-15% fall in FY2009 yields.

The carrier is also confident of its chances of receiving daily slots for Japan’s Tokyo Haneda Airport. The carrier is the only applicant without an existing presence in Japan. 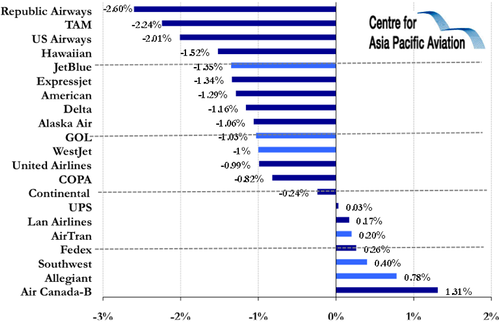