North and South American stocks climbed on Thursday (08-Apr-2010), boosted by reports of the potential merger between US Airways and United Airlines, with the AMEX Airline Index closing 3.4% higher as a result. The Dow (+0.3%) also moved slightly higher on the news, in addition to data showing a rise in retail sales. The rise was despite losses early in trading, following disappointing US jobless claims for Mar-2010.

US Airways and United Airlines rise on merger reports

US Airways (+10.7%) and United Airlines (+6.8%) shares soared as reports of the merger talks continued to spread. The two reportedly commenced merger negotiations over a month ago, with issues such as deal structure and management to be discussed in coming weeks.

In response to the reports, analyst comments were mixed. Morgan Stanley's William Greene stated the potential merger “may be less attractive in practice than on paper” and may have to overcome more regulatory hurdles than the Delta-Northwest merger.

UBS analyst, Kevin Crissey, commented that the merger would reduce capacity by up to 3%, mainly in the US, leading to an increase in fares.

Barclays Capital analyst, Gary Chase, meanwhile stated the reported merger plans are “compelling”, but warned that speculation about consolidation is “far more common in the industry than actual consolidation”.

JP Morgan analyst, Jamie Baker, stated the group has long seen the merger as “the most logical and feasible among potential legacy combinations”, as the merits of the potential deal are “considerable”. Mr Baker stated the deal would be less about improved revenue and integration synergies and more about cost savings.

At a time when carriers are showing capacity discipline, Air Canada (-4.4%) said it is increasing is seasonal Summer service by offering service between Toronto and Orange County in California by 50%. It said the new route was part of a major Toronto-California capacity increase this Summer that also includes a new route to San Diego, more service to San Francisco and the introduction of a B767-300ER aircraft on selected Los Angeles flights.

The new service to Orange County began yesterday to John Wayne International Airport. The daily, year-round service will operate with a 120-seat Airbus A319.

The LCC stated yields averaged above BRL 20 cents, continuing the gradual increase since the "extremely competitive scenario" in the middle of Oct-2009. Consequently, current yield levels are in line with its financial outlook. 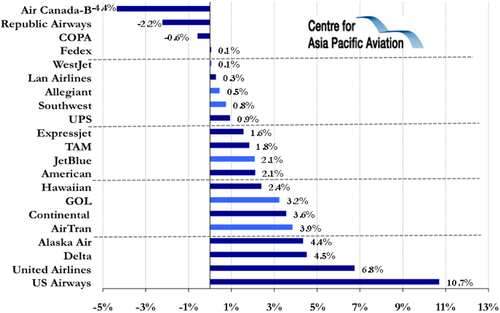