WestJet seeing indications that RASM declines are levelling off

However, in more positive news, WestJet, upon the release of its Oct-2009 traffic results, stated in the past six to eight weeks it has “seen indications that RASM declines have levelled off”, with the LCC adding that it is “seeing signs of improvement from what we were previously experiencing".

CEO, Sean Durfy, added, “while it is still too early to predict the strength or speed of a potential recovery, we feel optimistic about the future and the continued success of our airline."

WestJet, which has been one of the few profitable airlines in North America over the past 12 months and was once again profitable in 3Q2009, also reported an improvement in Oct-2009 load factor, up 1.5 ppts to 77.3%, for the second consecutive year-on-year load factor increase (prior to this, the carrier had reported seven consecutive months of load factor reduction).

This prompted Mr Durfy to state that the carrier is “encouraged” by its load factor performance in the month. 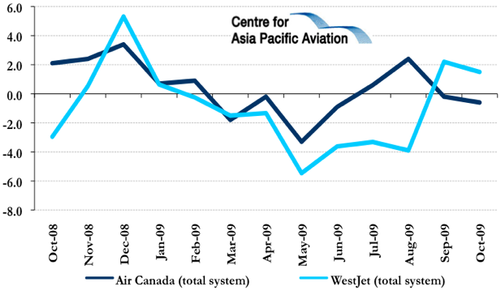 The LCC added that it has been seeing “more strength in both our business and sun destination bookings”. The carrier also stated it is “pleased” with early bookings of its 11 new Southern destinations (nine of which have already been launched).

WestJet is finally reducing capacity, after a period of steady growth in 2H2009 and early 2010, with Air Canada now heading back towards capacity growth, after well over a year of contraction. 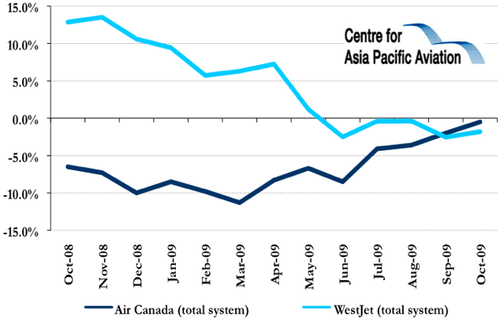 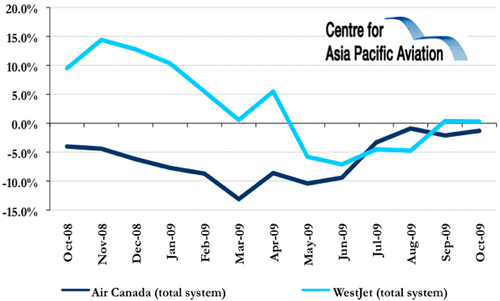 Air Canada reported a system load factor of 79.6% in Oct-2009 on a consolidated basis, a 0.6 ppt year-on-year reduction, while system traffic (RPMs) declined 1.3%, on a 0.5% capacity (ASMs) reduction.  Air Canada has reduced capacity every month in the past year, with the largest contraction of 11.3% experienced in May-2009. 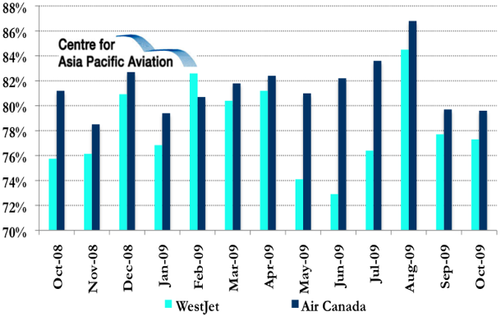 According to Air Canada President and CEO, Calin Rovinescu, the carrier’s load factor result is “close to last year's record load factor for the same month and underscores our continued disciplined approach to managing capacity”.

In other Air Canada news, ACE Aviation Holdings this month confirmed it is no longer the majority shareholder in Air Canada after its equity stake in the carrier fell from 75% to 27% following the carrier's share issue.