Air Berlin, which has continued to report impressive increases in RASK over the past two years (stemming from its effective capacity deployment plans and acquisitions that have reduced fare competition in some core markets), reported a 1.4% increase in revenue per ASK (RASK) in Mar-2010, to EUR 5.58 cents, for the third consecutive month of year-on-year RASK improvements.

Also in the month, as in Feb-2010, Air Berlin reported increased passenger numbers – up 4.8% to 2.4 million, including those travelling on the acquired TUIfly routes - as the carrier increased capacity (ASKs) by 7.3%. However, load factors were weaker, down 1.7 ppts to 72.3%.

Meanwhile, Europe’s largest LCC, Ryanair, reported a 13% increase in passenger numbers in the month, to 5.3 million, with a 2 ppt load factor improvement to 79%. In the 12 months to Mar-2010, the carrier has handled 66.5 million passengers, with an average load factor of 82%. The carrier issued a profit upgrade this week.

Also in the UK market, Monarch Airlines stated it has seen “strong” demand for scheduled services in Mar-2010, with average load factors across the network reaching 87% (a 4 ppt year-on-year improvement). The carrier added that it is witnessing strong increases in traffic to the Canary Islands of Fuerteventura, Gran Canaria, Lanzarote and Tenerife.

Also in Europe, shares in Jet2.com parent, Dart Group, gained 7.0%, with shares in easyJet gaining 0.9%. In the Nordic market, shares in Norwegian Air Shuttle were down 0.7% yesterday. 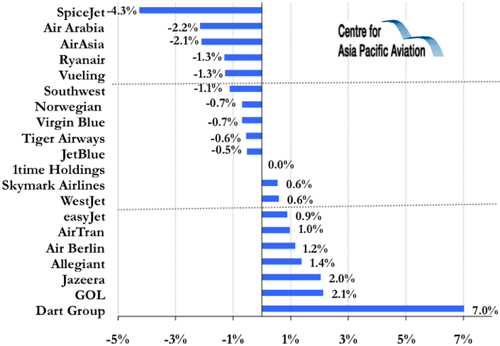