Air Berlin’s RASK up in the full year but weaker in Dec-2009; Monarch sees over 6.3 million pax 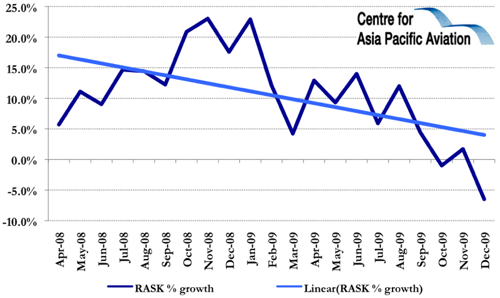 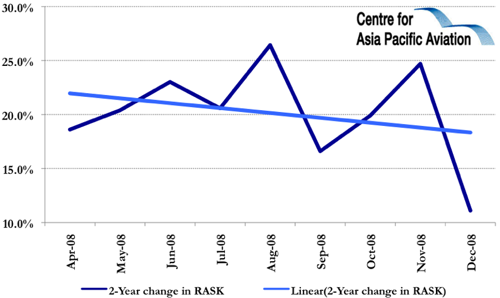 The German LCC transported 2.1 million passengers in the month (including TUIfly's former city connections), a 0.8% increase, on a 0.1% capacity (ASKs) increase. Load factor was up slightly, gaining 0.5 ppts to 73.1%.

In the full year, Air Berlin transported 27.9 million passengers (including those travelling on the TUIfly routes acquired on 25-Oct-2009), a 3.9% year-on-year reduction, as capacity (ASKs) was reduced by 2.6%. Load factors reached 77.3%, a 1 ppt year-on-year decline. 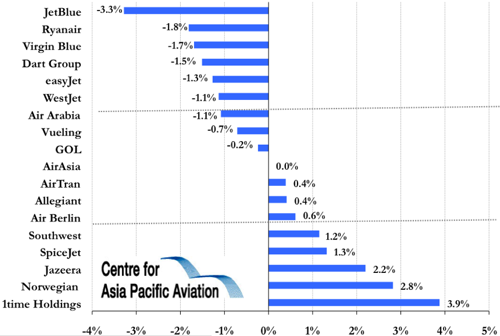 In other Europe LCC traffic news, Monarch transported over 6.3 million passengers across its charter and scheduled routes in 2009 and saw average load factors rise to 84.2%.

The carrier, which will this year celebrate its 42nd year of operation, commented that its continued robust passenger numbers and strong average load factors during 2009 were aided by the launch of eight new scheduled service routes. The carrier plans to launch new routes to Turkey in 2010, to further boost passenger traffic.

For daily LCC updates from around the world, sign-up to receive Peanuts! Daily.

Meanwhile, shares in Europe’s largest LCC, Ryanair, fell 1.8%, following a downgrade by RBS from ‘buy’ to ‘hold’. The downgrade follows a 21% increase in the share price over the past two months. RBS has left its earnings estimates broadly unchanged.

In the US, JetBlue’s shares slipped 3.3%, while Southwest’s shares gained 1.2%. In the Asia Pacific region, AirAsia’s shares remained unchanged, and in Africa, 1time Holdings’ shares were up 3.9%.