Germany’s second largest carrier (after Lufthansa) reported a 4.4% revenue per ASK improvement to EUR 6.22 cents in Sep-2009 – with the highest per km figure in at least 18 months – indicating that this strategy is in full swing. 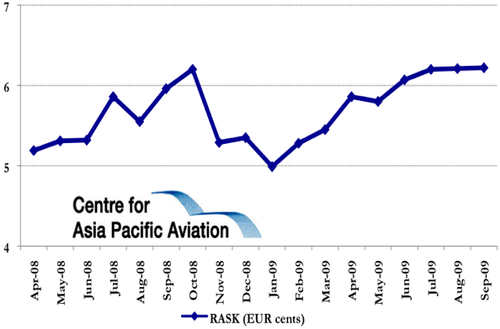 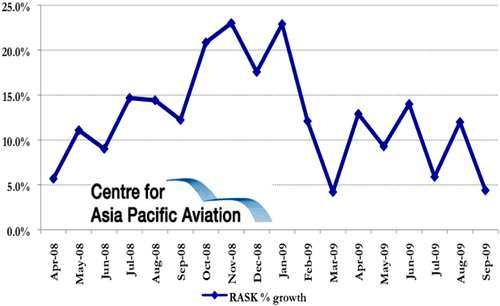 …but still gaining market share in the shrinking European market

However, despite its move away from a market share focus and despite a targeted capacity (ASKs) reduction of 4.8% in Sep-2009, the German LCC is continuing to gain market share, as growth in the European market continues to shrink at a greater rate.

Air Berlin, and other European LCCs, benefiting from the global economic crisis

According to Mr Hunold, Air Berlin has benefited from trade downs by business travelers from full service carriers, with the CEO previously stating that the slowing economic conditions in Europe “could be an opportunity for us, as it increases cost-consciousness”.

Numerous other European LCCs, including Vueling, Ryanair, easyJet and Germanwings, have echoed Mr Hunold’s comments about the benefits of the economic crises on LCCs.

Air Berlin, and other European LCCs, benefiting from the global economic crisis

Air Berlin is also one of a few European carriers and associations, such as AEA and IATA, which have highlighted a need for a change in strategy in light of the current economic crises.

Vueling CEO, Alex Cruz, backed up this need, stating that airlines need evolve in order to remain viable. This need is not only limited to LCCs, but network carriers in general, with Austrian Airlines, in particular, cautioning that demand will likely not return to previous levels at the end of the current economic crisis, with pressures from LCCs continuing to be high and many Business passengers downgrading to Economy travel on a permanent basis

Meanwhile, Mr Hunold stated that Air Berlin, which had planned to reduce its total debts to less than EUR600 million by the end of 2009, achieved that goal in mid-year and may reduce the level further.

Air Berlin confirmed TUI Travel subsidiary, Leibniz-Service, acquired 8.4 million shares in the carrier on 20-Oct-2009 (at EUR3.97/share), and now controls 9.9% of voting stock in the airline.

Air Berlin will conduct a capital increase of a corresponding amount, thereby realising EUR33.5 million in proceeds, which will be used for general corporate purposes

The move follows the implementation of an agreement on 07-Sep-2009, whereby Air Berlin will takeover the city flights network of the Hapag-Lloyd Fluggesellschaft (TUIfly) airline, effective from the 2009/10 Winter schedule.

However, Air Berlin and TUI Travel will no longer implement the previously-announced cross-shareholdings, with Air Berlin confirming it has no short or long term plans for a complete takeover of TUIfly.

Through its takeover of the TUIfly city routes, Air Berlin is strengthening its presence in the Cologne, Stuttgart and Italy markets, with Mr Hunold stating, the move is “extremely important for business customers in particular”.

The approval of the agreement means that all previous inter-city services will become the commercial responsibility of Air Berlin from the start of the 2009/10 Winter schedule (25-Oct-2009). This covers all domestic German services in addition to those to Italy and Austria. All services already booked with TUIfly for these routes will then be handled by Air Berlin.

To this end, Air Berlin will charter aircraft from TUIfly by way of a long-term leasing contract: initially 13 aircraft for the 2009/10 Winter schedule and then 14 aircraft from Summer 2010 onwards (wetlease included).

New shareholding structure for Belair, as Hotelplan Group opts out

Air Berlin announced plans to strengthen its base in Switzerland, as part of which the carrier will change its shareholding structure of Belair Airlines (Belair), a charter carrier headquartered in Glattburg and based in Zurich.

Air Berlin transferred the option of a 51% share in Belair, agreed in 2007, to a Swiss trust, which has exercised this option with Hotelplan Holding and become the new owner of the 51% stake in Belair.

This change of ownership leaves Air Berlin’s holding unchanged at 49% (Belair’s accounts will continue to be fully consolidated in Air Berlin’s financial statement), with the trust having granted Air Berlin an option to acquire the 51%.

Mr Hunold remarked that “despite the challenging market environment we have managed to build on our position in the Swiss market and to offer our Swiss customers a wider range of services”.

In Mar-2007, the Air Berlin Group announced the acquisition of a 49% share in the airline from Hotelplan Holding AG, with the agreement being finalised in Nov-2007, as part of its expansion strategy, which also saw it purchase domestic rival DBA, the former German unit of British Airways, in 2006, and the charter airline, LTU, the following year. Through this acquisition strategy, Air Berlin has become Europe’s third largest LCC.

Over the past two years, the Air Berlin Group has doubled the size of its fleet in Switzerland from three to six aircraft, to triple in size in the European Spring 2010. By then another three aircraft will have been added to the fleet, making a total of nine Airbus aircraft (eight A320s, one A319).

Over the next few months, Air Berlin is planning to create more than 100 new posts for cabin staff and 30 for cockpit staff in Switzerland, increasing the number of employees to approximately 320 (200 cabin crew, 100 pilots and 20 ground staff) by Summer 2010.

These new staff will be necessary as the carrier introduces additional services to Spain and Italy for its Summer 2010 (from Mar-2010) schedule as follows: 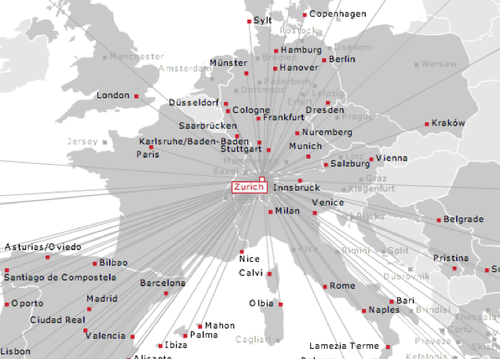 To Thailand in cooperation with Bangkok Airways

Air Berlin, meanwhile, announced plans to strengthen its presence in Thailand, with the signing of a codeshare agreement with Bangkok Airways for connecting services from Bangkok.

A strategy of partnerships

Heading to America, with new destinations and increased frequencies 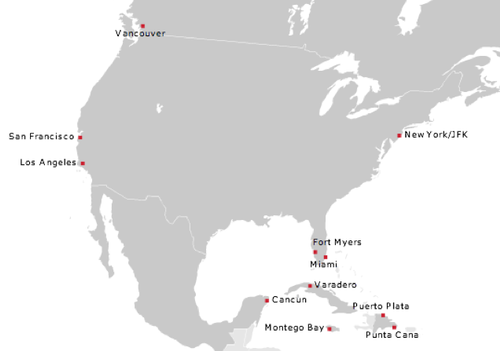 A330 equipment with a capacity of 303 seats (24 of Business Class) is used on the North American routes.

… and to Romania too

NIKI, Air Berlin’s partner airline, is also augmenting its presence in Eastern Europe, with services to Bucharest and Belgrade from Feb-2010.

In Summer 2010, Air Berlin will be increasing frequencies to Majorca from Frankfurt and Hamburg, and for the first time since 2007 there will be an additional daily service from Berlin-Schönefeld to the Balearic island.

In other network news, Air Belrin launched 12 times weekly Vienna-Karlsruhe/Baden Baden service on 25-Oct-2009 and announced plans to launch three times weekly services from Frankfurt, Stuttgart and Dusseldorf to Jerez (Spain) in Nov-2009. Service between Vienna and Jerez will commence in Feb-2010.