European shares reached a five-week closing high yesterday, while the FTSE 100 Index reached its highest close in ten weeks, as bank stress tests (conducted by the Committee of European Banking Supervisors) showed a reassuring level of robustness, leading to gains in the banking sector. A strong rebound in US home sales for Jun-2010 also pushed the market into positive territory, with the resulting following a record low month in May-2010.

Shares in Air Berlin gained 0.3% on 26-Jul-2010, the same day the German LCC announced the signature of an agreement with oneworld on key aspects of Air Berlin's membership in the alliance.

Under the sponsorship of British Airways, Air Berlin will work towards completing a full membership agreement with oneworld. Air Berlin has also entered into codeshare agreements with American Airlines and Finnair, effective 01-Nov-2010. The agreements cover 15 additional destinations in the US and two in the Bahamas, operated by American Airline. Codeshare flights with Finnair cover service to Helsinki, within  Europe and to Asia. The implementation of these agreements is subject to all necessary regulatory approvals.

In other European LCC news, Ryanair CEO, Michael O'Leary, stated he still plans to launch a trans-Atlantic venture by 2015.

Mr O’Leary, also stated he has no regrets about being forced to make a “humiliating apology” to easyJet for advertisements criticising its punctuality, stating the ads "served a purpose" by focusing attention on easyJet punctuality issues. Mr O'Leary added the carrier received an increase in bookings after he issued the apology, stating: “I am sure there is such a thing as bad publicity, but we’ve never found it. I think I would only be safety related. I don’t care if everybody hates us so long as they keep flying with us. We’re like Aldi or Lidl – nobody admits to shopping there but they are growing like gangbusters.” Shares in Ryanair slipped 0.1% yesterday while easyJet shares gained 0.7%.

Meanwhile, shares in Spanish LCC, Vueling, soared 8.1% yesterday, a day ahead of the release of the carrier’s 2Q2010 financial results on 27-Jul-2010. The carrier reported a net loss of EUR6.3 million in 1Q2010, table from 1Q2009 levels.  Also gaining strongly yesterday was Dart Group, parent company of Jet2.com, with a 5.1% rally in its share price yesterday. 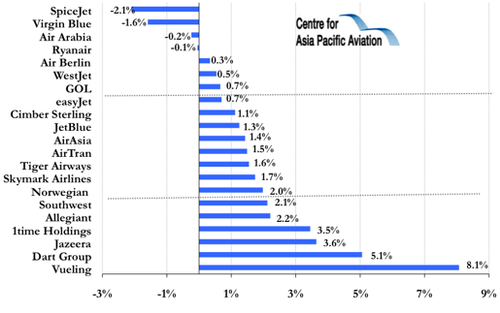