Air Berlin (+3.1%) continued to advance on Thursday (25-Nov-2010), rising with the majority of European airline shares. The carrier was up on the announcement it signed a USD700 million package deal with ICBC Financial Leasing Co covering 18 used and new narrowbody aircraft.

The deal consists of two parts: an outright sale of four B737-800s and six A320s and sale-and-lease-back of two A319s, two A320s and four B737-800s. All aircraft are powered by CFM International engines. The agreement was partially closed in Sep-2010. Both companies are looking forward to the execution of the majority of these transactions in 2011 and 2012.

Lufthansa (+2.4%) also rose. It plans to add almost 2,000 more seats to its single-aisle, short haul aircraft by the end of 2011, by installing seats with slimmer backrests. The move will allow the carrier to add up to two extra rows of seating per aircraft, equivalent to 12 passengers. The overhaul will involve around 200 aircraft. Lufthansa last revamped its short haul fleet in 2006.

Thomas Cook Group (+0.8%) made a minor gain for the day after announcing plans to create a JV with Intourist, a Russian travel agency. Thomas Cook will take a 50.1% stake in the JV and invest GBP29 million (USD45 million) in cash and shares. The JV is part of Thomas Cook's plan to move into the growing Russian market and capitalise on Russia's demand for travel to leisure destinations in Turkey and Egypt. 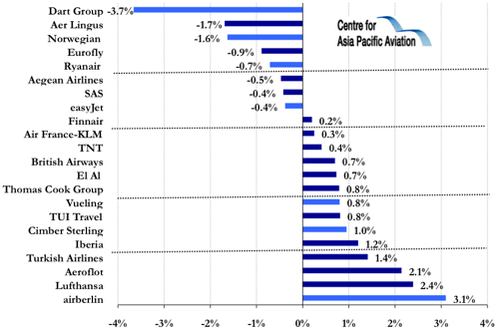