Air Berlin's shares gained 1.8% yesterday, as the carrier reported a better-than-expected operating profit in 2Q2009. The carrier reported net profit of EUR7 million in the quarter (-9% year-on-year), with EBITDAR and EBIT levels up by 2.5% and 33.3%, respectively, to EUR135 million and EUR18 million. The carrier is scheduled to release its full financial results later today.

Also in North America, WestJet's shares fell 4.5%, as the carrier announced plans to slow its expansion due to the ongoing weak economic conditions. The Canadian LCC signed an agreement with Boeing to reschedule the delivery of 16 aircraft and announced the purchase of an additional 14 B737NG aircraft, for delivery in 2015 and 2016. WestJet was previously expected to grow its fleet size to 121 aircraft by 2013, with the carrier now planning to end the year with between 108 and 111 aircraft. With the revised plan, WestJet now expects capacity growth of 5-10% in 2010. 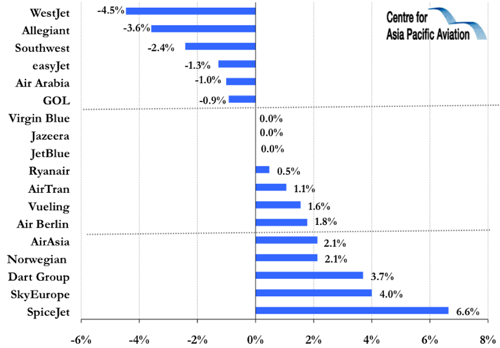