Air Berlin shares gained 2.1% yesterday as the carrier confirmed its 2010 outlook and stated it is expecting "improved revenue performance and in improving margin" in 2H2010, on improved demand and yields. The carrier added that recent acquisitions would offset losses due to the volcanic ash cloud disruption in 2Q2010.

Air Berlin's expectations for a continued recovery of air traffic echo comments made by Lufthansa and IATA earlier this week.

The carrier stated it expects EBIT in 2010 to exceed the 2009 level of EUR28.5 million, with the carrier adding that further increases in passenger numbers and ticket prices as well as continued cost control will help improve profit margins. The carrier added that the first-time inclusion of Austrian LCC, NIKI (which Air Berlin acquired earlier this year) and proceeds from planned aircraft sales will help offset the EUR40 million in losses accumulated due to the volcanic ash cloud air space shut downs in Apr/May-2010.

Air Berlin, which recently joined the oneworld airline alliance led by British Airways PLC (BAY.LN), said it swung to a net loss in the second quarter despite a EUR11.3 million tax benefit, mainly because of the losses incurred in the volcanic ash crisis.

During 2Q2010, the carrier slipped to losses, with losses at the EBITDA, EBIT and net levels of EUR5.5 milion, EUR28.2 million and EUR56.9 million, respectively, compared with profits of EUR44.1 million, EUR17.6 million and EUR7.6 million, respectively, in the previous corresponding period. Revenues increased 4.9% to EUR877 million, while costs (before leasing and depreciation) increased 8.3% to EUR765 million.

Meanwhile, Air Berlin CEO, Joachim Hunold, stated the carrier is in talks with partners from the oneworld alliance to launch its first codeshare services in Nov-2010, commenting: "We're in concrete talks with American Airlines over code share flights that we'd like to start in November. The same applies for Finnair Oyj."

He added that the codeshare with Finnair would provide the carrier with access to the Asian market, while talks with British Airways and Iberia (providing access to the South American market) cover codeshare services to commence in summer 2011 schedule, would commence shortly. He added the carrier also plans to expand its position in the trans-Atlantic and US market by entering codeshare agreements with American Airlines and British Airways, with the carrier estimating an agreement would offer an "incremental market potential" of 2.4 million and 1.7 million passengers p/a, respectively.

In other European LCC news, Avianova CEO, Andrew Pyne, stated the Russian LCC has created a “price revolution" in the Russian market after its first year of operations.

Russia’s second LCC, owned by Alfa Group's A1 investment arm and US-based private equity firm Indigo Partners, has grown quickly since commencing operations in 2009, and stated that it aims to lower fairs to “nothing”, and generate revenue solely through ancillary offerings. Mr Pyne stated the airline had “concrete achievements” over the year, but would not discuss the financial state of the airline.

Avianova operates to 22 destinations across Russia with a fleet of 180-seat A320s. The carrier is targeting 1.2 million passengers by the end of 2010, up from 605,777 in the seven months to Jul-2010, according to the Russian Federal Air Transportation Agency, which added the airline was the fourth-largest domestic Russian carrier in Jul-2010. 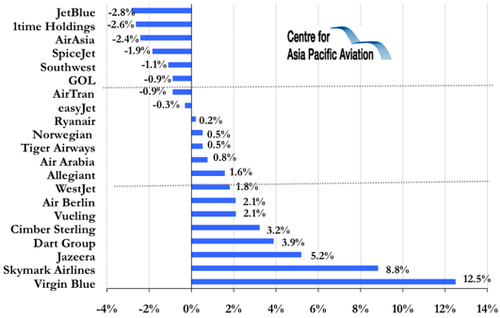