Air Berlin’s share were up 0.3% on Thursday, upon the release of the carrier’s 3Q2009 financial results, with the carrier reporting a EUR118 million operating profit and a EUR95 million net profit, gains of 33.5% and 111.1%, respectively.

In achieving these positive results, Air Berlin was aided by reduced costs, attributed to the carrier’s ‘Jump’ efficiency programme, which helped offset an 8% reduction in revenues.

The results prompted CEO, Joachim Hunold, to state that he is “more than pleased with the results”, which makes the German LCC “one of the few airline companies that was able to improve profit in the third quarter of 2009."

However, Air Berlin warned that yields are expected to weaken in 4Q2009, although the carrier has still maintained its previous forecast that EBIT for FY2009 would be in excess of 2008 levels.

Also in Europe, Norwegian’s shares gained 6.9%, while Ryanair and easyJet shares were down by 1.0% and 0.9%, respectively.

In the US, Southwest’s shares slipped 4.6%, on the same day the LCC declared a quarterly dividend, its 133rd, of USD.0045/share to shareholders.

AirAsia “happy” with 3Q2009 results; to list in Thailand and Indonesia

In the Asia Pacific, AirAsia’s shares gained 3.2% yesterday, ahead of the release of the carrier’s financial results, due out today (20-Nov-2009). CEO, Tony Fernandes, stated the carrier is “happy with the result” for 32009, which is traditionally the weakest quarter for the airline.

Meanwhile, Mr Fernandes, in an interview with Malaysia's Business Times, stated the carrier plans to list itself on both Thailand and Indonesia’s stock exchanges, including a dual listing in Thailand, as part of plans to develop a single ASEAN airline identity.

In other finance news, Tiger Airways is reportedly considering launching an IPO of at least USD500 million, or 20% of its share capital, in 2010, to fund expansion plans in Australia and purchase new aircraft.

Virgin Blue the market has bottomed, but fares still unsustainable

Virgin Blue CEO, Brett Godfrey, in an address to the Queensland Media Club yesterday, stated he believes the market has bottomed out, with the carrier planning to provide a market update at its AGM next week. 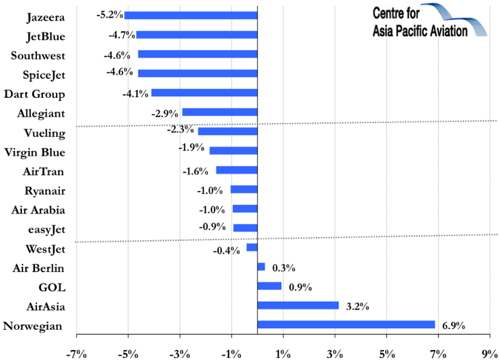