European carriers’ shares soared with wider markets on Thursday (25-Mar-2010), as Germany and France reached an agreement on plans to provide support to Greece through eurozone countries and the International Monetary Fund. In key markets, UK’s FTSE (+0.9%), France’s CAC (+1.3%) and Germany’s DAX (+1.6%) were all up at the end of trading.

For 2010, Air Berlin expects to grow faster than the overall market, for which IATA has predicted a 4.5% increase in passengers transported. This would bring the number of passengers travelling on Air Berlin in 2010 significantly over the 30-million mark, for the first time. Air Berlin is "focusing on its intra-European flights, for which the impulses are expected to be the strongest" and is expecting a "noticeable increase in profit for the 2010 business year, in particular since the routes acquired from TUIfly will contribute to revenue for the first time over the entire year". The carrier stated it would also continue its efforts to improve performance and reduce costs.

Still no final merger agreement between Iberia and British Airways

Iberia's (+2.3%) Board did not reach an expected agreement to approve a planned merger with British Airways (+3.4%) on 25-Mar-2010, with the carrier confirming that "there wasn't a decision today and the board will keep working on the plan". BA stated that a merger accord is still expected to be signed this month, commenting, “we have always said that we plan to sign the merger agreement in 1Q2010”. So, five days to go... 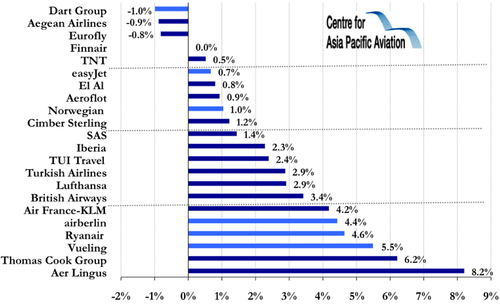