Air Berlin’s shares fell 2.3% yesterday, on news that the German LCC reported a 6.5% year-on-year reduction in revenue per ASK (RASK) to EUR 5.33 cents in Dec-2009, for only the second year-on-year RASK reduction in over 20 months.

In other Air Berlin news, Mubadala Development, the investment arm of the Abu Dhabi Government, has entered the aviation components financing sector with a USD100 million agreement with Air Berlin. For the airline, the transaction is an off-balance-sheet financing agreement. The agreement makes Air Berlin “one of the first airlines in Europe to directly access this source of funding”, according to CEO, Ulf Huttmeyer.

The transaction will allow the carrier to reduce its net debt and capital employed on its engines, with the LCC anticipating double-digit million dollar savings to be generated over the contracted period.

In other European LCC news, Lufthansa reported that its LCC subsidiary, Germanwings, handled 7.2 million passengers in 2009, a 6.0% year-on-year reduction.

Also in the region, Japanese LCC, Skymark Airlines, rose 18.9% yesterday, after jumping as much as 21%.

In the Americas, GOL’s shares fell 2.5%, as Brazil’s Bovespa stock index fell the most in three weeks, on concern the pace of the global economic recovery will falter, slowing demand for the nation’s raw-material exports.

In the US, shares in Southwest and JetBlue were both down 1.1%. 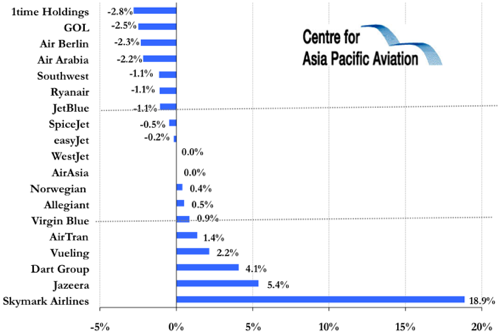