Air Berlin's shares gained 8.0% yesterday as the German Cartel Office approved its new investor and most airlines benefited from a combination of diminished concerns about the Swine Flu threat and improved outlooks for some banking sector stocks.

Aer Lingus (+8.1%) meanwhile rebounded partly from its 20% fall the previous day and most other majors showed healthy gains as the market generally looked on the bright side. Lufthansa (+7.1%), Norwegian (+6.8%), TUI (+6.6%) and Iberia (+6.0%) led the way up, with all others except Austrian and Thomas Cook in positive trading territory. 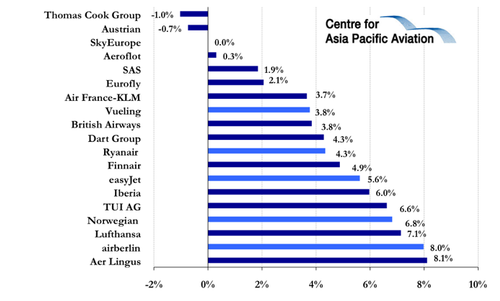 The company’s website was relatively constrained in announcing the news yesterday:

“Air Berlin: Federal Cartel Office approves ESAS investment. The Federal Cartel Office in Bonn has notified Air Berlin PLC & Co. Luftverkehrs KG that it has no objections to the Turkish company ESAS Holding A.S. acquiring a stake in the airline. At the end of March this year ESAS Holding bought approximately 15 per cent of the voting shares in Air Berlin PLC. The holding company, which also operates Pegasus Airlines, is to be represented by a non-executive director on the board of Air Berlin PLC.”

But the new relationship with Turkey’s aggressive airline industry will be a big bonus for the German carrier. Esas Holding, which now becomes the largest shareholder in Air Berlin (with a 15.3% holding), is the owner of Pegasus Airlines, Turkey’s largest privately held charter airline, with some domestic scheduled routes. Chairman of the Board of Directors of Pegasus Airlines, Ali Sabanci, will now sit on the Air Berlin board.

For Air Berlin, the financial and strategic benefits are immediate; for Pegasus, enhanced access to the EU will generate a new range of opportunities.

In a formal statement, Ali Sabanci said, “consolidation is already widespread in Europe and the rest of the world, as it should also now be in Turkey. Mergers are increasingly a way for airlines to reduce costs and expand their network on a global scale.

"As, we have set our vision beyond Turkey and see value in investing in EU countries. We were encouraged by Germany’s significance within the EU, as well as Air Berlin’s strength and management team."