Air Berlin and Turkey's Pegasus Airlines have commenced cross-linking of their websites, providing both companies with new market opportunities.

The partnership is not a traditional interline or codeshare agreement and is similar to that in place by JetBlue and Aer Lingus. Such an agreement enables the carriers to avoid the costs and challenges of a traditional codeshare arrangement, by having a partnership primarily based on connecting the airline’s respective websites.

The cooperation agreement follows Turkish ESAS Holdings’ acquisition of a 15.3% stake in Air Berlin earlier this year. ESAS Holdings is the second largest industrial and financial group in Turkey and the owner of Pegasus. Air Berlin's shares gained 1.4% yesterday.

Elsewhere in Europe, easyJet's shares were up 0.8%, while Ryanair was 0.4% weaker.

In the US, Southwest shares gained 1.4%, while in the Asia Pacific region, AirAsia shares slipped 0.7%. 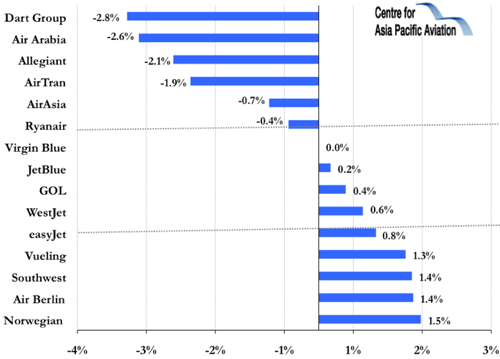