Air Berlin, Germany second-largest and Europe’s sixth largest airline, reported a net loss of EUR102.6 million for 1Q2011 on the back of falling traffic in key markets and a spike in jet fuel prices in the quarter. Like its “disappointing” 2010, the carrier continues to be affected by the recurrence of “non-recurring” events.

CEO Joachim Hunold stated that “sharply rising commodity prices made their mark in the first three months of the year. Compared with the same quarter of last year, pro forma fuel expenses are 22.2% higher. The expense ratio for fuel rose from 23.8% of flight revenue to 29.0%. Our successes in limiting other cost factors did not compensate for this development. In addition, rising fuel surcharges could not fully compensate for the increase in fuel prices as such increase was too strong and happened too rapidly.”

Passenger numbers in the period increase 1.6% to 6.87 million. Air Berlin, which has an extensive North African network, was affected by civil unrest across the region in the quarter. Compounding the issue and year-on-year comparisons, Air Berlin did not have the Easter traffic boost it had 1Q2010, CFO Ulf Huttmeyer stated.

Total revenue increased 2.0% to EUR751.6 million driven by higher loads. RPK growth (+5.2%) outpaced growth in ASKs (+3.0%), with load factors increasing 2.2 ppts to 72.5%. Revenue growth came in weaker than expected due to the impact of political crises in key markets and the missing Easter holiday.

Soft demand and pricing weakness was evident in falling yields, which were down 1.8% to EUR97.80. Total revenue per passenger increased 0.1% to EUR109.37 due to higher service turnover. Revenue per ASK (RASK) fell 1.0% to EUR5.9 cents.

Among the most dramatic increases in Air Berlin’s costs in recent years has been in airport charges and operating leasing. Airport charges and handling has swelled to become the airline’s largest single cost item as the former LCC moves into major airports, many of which have hiked charges in recent years. The airline’s preference for leased aircraft has seen operating lease expenses rise sharply since 1Q2008. Lease expenses in the period increased 19.7% to EUR141.6 million. Compared with 1Q2008, quarterly lease expenses are up 70%. 81.9% of Air Berlin’s fleet is leased, the third-highest ratio of leased-to-owned aircraft in the world, behind Malaysia Airlines (93%) and Garuda Indonesia (90%). 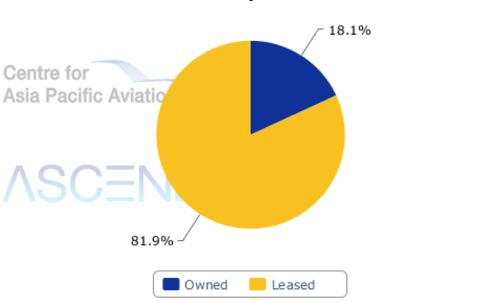 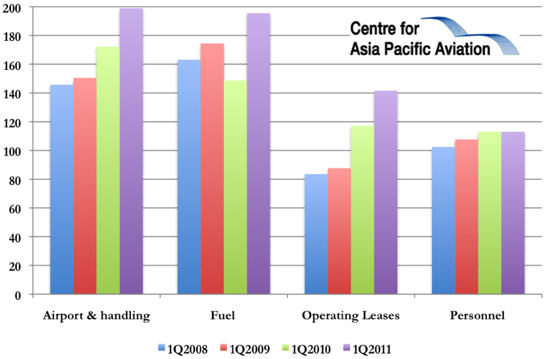 A major difficulty is that high oil prices act as an indirect tax on consumers, putting upward pressure on living costs and dampening appetite for discretionary leisure travel, the market in which Air Berlin still competes.  The airline was unable to match the sharp cost increases with similar price adaptions. EBIT fell to a EUR188 million loss from a EUR106 million loss a year earlier. The EBIT margin blew out to -25.1% in the quarter. A positive tax affect brought the net loss to EUR120 million. 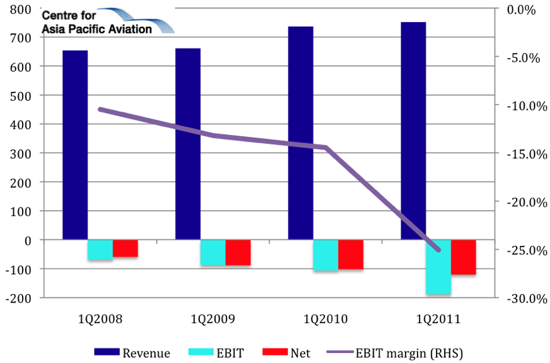 Upbeat on FY2012 despite poor start

On the cost side, Air Berlin will fully integrate LTU in 2011 and it expects to reap cost synergies immediately. The carrier warned of the unpredictability of fuel prices, adding that its hedging initiatives will not fully absorb oil price spikes. 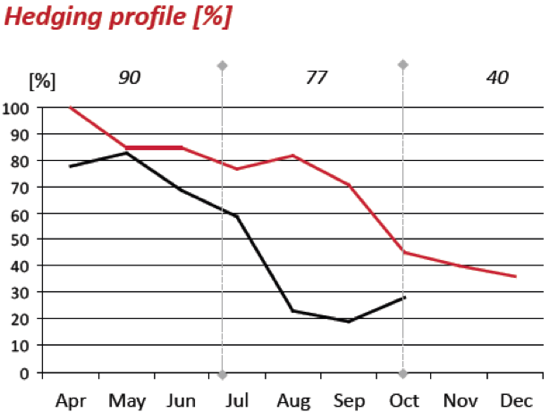 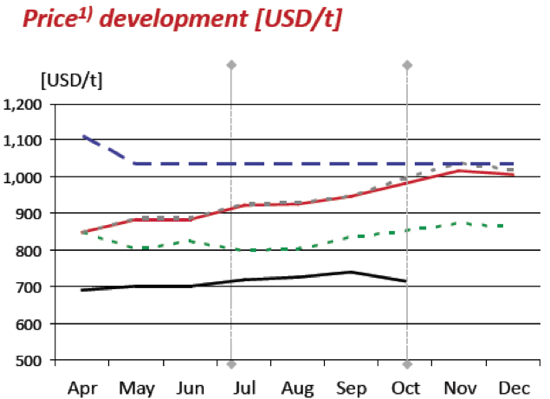 With less free cash being generated from operations, the carrier moved to raise cash from external sources in Apr-2011 with a bond issue that was heavily oversubscribed. The eight-year EUR150 million, 8.25% corporate bond issue generated widespread interest and proceeds are available for refinancing and ongoing corporate purposes.

Despite its weak start to the year, Mr Hunold said the carrier still aims to report an operating profit for the full year. It expects sales to increase and grow passenger numbers between 4-5%. Germany remains the bright spot on the troubled European map, and Air Berlin remains confident that record low (euro zone) interest and (local) unemployment rates should combine to provide a strong summer season in its home market.