Air Arabia Maroc, subsidiary of Air Arabia (-1.8%), announced the launch of three-times weekly Alexandria service, the LCC's 12th destination from from its Casablanca base. From 31-Oct-2010, the airline will increase frequency to four times weekly

Ministry of Tourism – Kenya reports tourist arrivals rose 14% year-on-year for the eight months ended Aug-2010. The Ministry also stated its 1H2010 earnings rose 85% on last year to USD602.8 million despite “the global recession, the volcanic ash, fierce competition from our neighbours as well as the continent”, according to Minister of Tourism Najib Balala.

However, Mr Balala also stated "anything that happens to Kenya Airways affects arrivals. We hope there will be some sense. It (the dispute) has not reached our level of government yet," he said, adding that frequent delays by the carrier gave it a reputation for inefficiency. I want Kenya Airways to open new markets and these should be in tandem with the national tourism strategy." 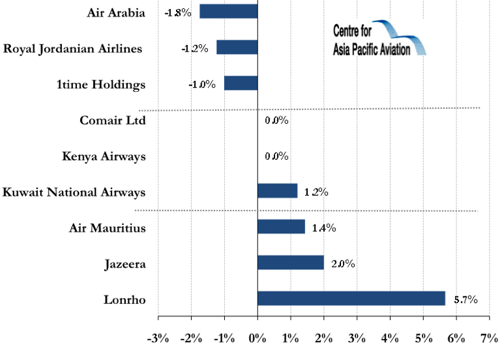