Air Arabia (+1.0%) was the only Middle Eastern airline stock to rise on Tuesday, following news during trading that the LCC reportedly plans to launch commercial operations from its third hub in Alexandria, Egypt the end of Apr-2010. The carrier has yet to announce which destinations the hub will serve. Reports earlier in the week suggested the launch had been pushed back to 2H2010.

Also in the Middle East, Kuwait National Airways was flat, while Royal Jordanian (-2.0%) was down.

In Africa, 1time Holdings (+3.5%) gained after reporting a net profit of USD11.3 million for the 12 months ended 31-Dec-2009, compared to a profit of USD136,203 in the previous corresponding period. The company’s revenue was up 19% year-on-year, to USD170.3 million, while revenue for 1time's airline operations totaled USD141.7 million. The remainder of revenues came from aircraft maintenance operations. Passenger numbers were also up, rising 12% for the year.

Elsewhere in Africa, Lonrho was flat. Subsidiary, Fly540 signed a distribution agreement with Travelport. The carrier, which is participating on Travelport’s GDS channel for the first time, will make its published fares and inventory available to both Galileo and Worldspan-connected users worldwide. The agreement takes immediate effect. Fly540 is currently the second largest airline in Kenya in terms of the number of flights and available capacity. It operates primarily in Kenya, Uganda and Tanzania and has grown rapidly since commencing operations in Nov-2006. It is currently expanding into new territories in the region. 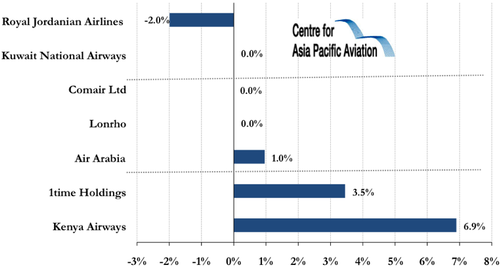