Sharjah based Air Arabia, the Middle East's most successful and until recently overtaken by flydubai, the region's largest LCC, reported a net profit of AED59 million (USD16 million) for the three months to the end of Mar-2013.

The result continues a remarkable run of profitable results for the carrier, stretching all the way back to its first year of operations, even through the Arab Spring period - resulting in a near-doubling of its share price over the past year.

Expansion plans continue, with a new order in the offing, to be selected from the A320neo, 737 MAX and the Bombardier CSeries, according to CEO, Adel Ali.

Headquartered in Sharjah, UAE, the Air Arabia Group is the first publicly-owned airline company in the Arab World and is listed on the Dubai Financial Market (DFM:AIRARABIA). All airlines in the group share the common 'Air Arabia' branding and employ low-cost business models.

In addition to the Sharjah based original, Air Arabia's cross-border joint venture subsidiaries, with local investors include: 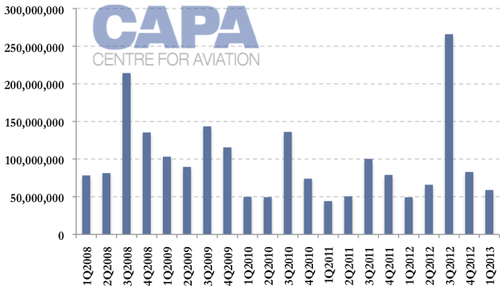 The 1Q2013 result was up 20% year-on-year, the strongest first quarter result for the airline since 2009. According to the airline, the result is attributable to its “appealing product offering and strong operational performance”. 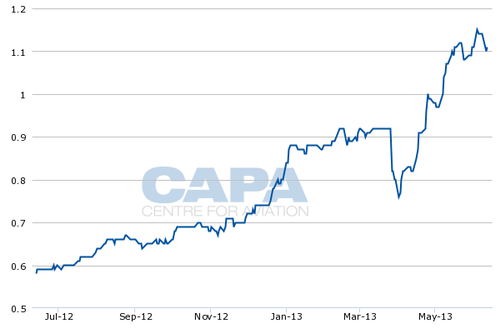 Revenue grew 22% year-on-year to AED722 million. Passenger traffic grew 17.5 per cent growth compared to the same period last year, to a record 1.45 million, as the airline added new routes to Mattala, Baghdad and Sialkot, all from its main hub at Sharjah. However, the airline suspended its new route to Mattala after just six weeks of operations, reportedly due to low passenger levels.

The new routes were supported by the delivery of two new A320s, including the first aircraft in the Middle East with the new, fuel saving ‘sharklet’ wingtip devices. The carrier has since taken delivery of another two A320s, similarly equipped.

Air Arabia also increased frequencies to Beirut, Dhaka and Salalah. Average load factors for the quarter were 82%, roughly equal to 1Q2012 levels despite the Mattala suspension and the overall capacity expansion.

Air Arabia’s chairman, Sheikh Abdullah Bin Mohammad Al Thani was buoyant about the result, proclaiming that the airline “continues to set benchmark for the LCC model as well as for the wider aviation sector in the region.” While the carrier’s results continue to show improvement, AirArabia is also facing a major competitive threat from flydubai.

According to CAPA's Fleet Database, Air Arabia is due to take delivery of another two aircraft this year (for a total of six in 2013) while nearby competitor flydubai is due to receive another four, on top of the two already delivered this year, to match Air Arabia’s fleet expansion. 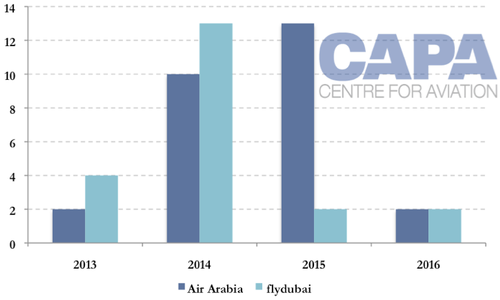 Air Arabia is not getting it all its own way. flydubai is progressively challenging Air Arabia’s position as the pre-eminent LCC in the Middle East, although Air Arabia remains the only listed airline of this genre. The Dubai-based carrier reported 285% growth in passenger numbers from the CIS and Central & Eastern Europe markets, albeit growing off a small base.

Like Air Arabia, flydubai is concentrating on opening up new destinations in South Asia, Central Asia and Eastern Europe, as well as more routes in the GCC and wider Middle East, resulting in significant overlap between their UAE-based networks. In the past few months flydubai has added services to Salalah, Mineralnye Vody, Mattala, Juba, Osh and Dushanbe. flydubai has also announced its intention to add new routes to Rostov-on-Don, Krasnodar and Volgograd in Sep-2013, and increase its capacity into Sri Lanka.

flydubai, six years younger than Air Arabia, operates to 60 destinations in 33 countries, with a fleet of 30 737-800s, as well as another 21 on order. Air Arabia Group has a fleet of 32 aircraft, with five of those based at its secondary hubs in Morocco and Egypt, leaving only 27 aircraft at its main hub in Sharjah.

However, even in its more mature GCC market, Air Arabia still reported a 65% increase from the GCC in 2012. The carrier’s GCC network is now the largest of all Middle Eastern carriers, with 265 flights per week to Bahrain, Kuwait, Oman, Qatar and Saudi Arabia.

Air Arabia is slated to take delivery of 10 A320s in 2014, compared to 13 by flydubai, but more fleet orders may be forthcoming from both carriers, despite the fact they each already have more than 20 aircraft on order.

To support the acquisition of 10 new A320 aircraft, in May-2013, Air Arabia entered a USD350 million financing facility with Qatar National Bank and Commercial Bank International.

Air Arabia CEO Adel Ali said in May-2013 that the carrier plans to add to its fleet and replace aircraft that have been in service for three years and will make a decision on its next aircraft order within 18 months. According to Mr Ali, the airline is "well covered" for its financial requirements in 2013 and 2014 and is not concerned about finding funds for fleet expansion in the next three years.

In Apr-2013, in an interview with Arabian Business Mr Ali confirmed that Air Arabia is looking at the Airbus A320neo for its future fleet, but “there is also interest” in the Boeing 737 Max and the Bombardier CSeries. Mr Ali stated that “only time will tell which direction we head.”

With flydubai breathing down its neck, Air Arabia shows no signs of slowing its own growth. In the GCC, Saudi Arabia continues to hold a powerful attraction for the carrier. Air Arabia added its eight route to the country service on 22-May-2013, launching a new service to Abha from its main hub in Sharjah. The destination is Air Arabia’s 85th worldwide.

The twice-weekly route increases the carrier’s offering into Saudi Arabia to 88 non-stop flights. Most of these are operated to Saudi Arabia from its main hub at Sharjah. In addition to the new Abha route, Air Arabia operates to Riyadh, Jeddah, Madina, Dammam, Qassim, Yanbu and Taif. The carrier also has services from its Egyptian hub in Alexandria to Medinah, Dammam and Jeddah. Air Arabia Egypt entered the Saudi market in Jun-2011. 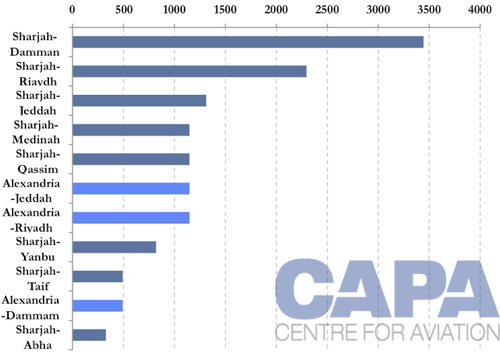 Air Arabia now operates more than 10,000 seats per week into Saudi Arabia, and its capacity into the country will continue to climb. According to Mr Ali, the country remains a key focus for the airline, and it is continuing to explore opportunities for growth in the market.

Despite the fact that Saudi Arabia is Air Arabia’s largest single country market in the Middle East, most of its UAE based competitors have much a much stronger presence in the market. flydubai operates nearly 100% more capacity the Air Arabia does into the country. 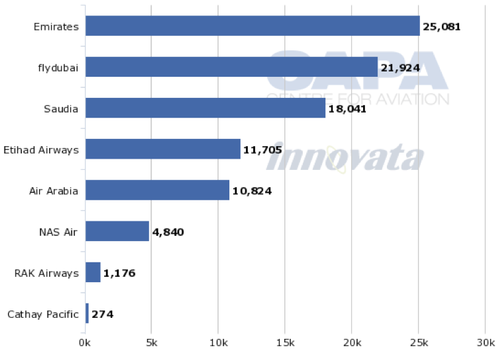 The UAE’s large, sixth freedom carriers are also coming to see Saudi Arabia as a core market, to the point where Emirates deploys A380s in 544-seat "medium haul" 517-seat configuration.

Air Arabia remains on its stellar track, despite its competitive neighbours

Among its much larger, world market leader airlines based in the UAE and the wider Gulf region, Air Arabia is not only holding its own, but apparently continuing to flourish. Its aggressive route planning and attention to cost control are allowing it to continue to claim the mantle of "benchmark".

While it may not be the biggest among the titans, this hardy little operator is showing it can compete profitably among almost any competition.