Air Arabia, MENA’s first and largest LCC, has continued to report net profits throughout the global financial crisis and in 1H2010, and has emerged from the crisis as one of the best positioned carriers worldwide.

Meanwhile, Jazeera Airways reported its third consecutive loss in 2Q2010, coming off a loss in 2009 (the carrier labelled the year as an “operational success and commercial loss”), as the carrier suffered from the economic downturn in the heightened competitive environment on short-haul sectors to/from/within the Middle East. The most recent unprofitable result is another bitter pill for the carrier, which had previously seen three years of profitable expansion and development.

Jazeera Airways, like AirArabia, had previously been among the few consistently profitable carriers in the region. However, the carrier, despite the losses, does have a strong network, solid product and a young fleet. It also should be noted that Jazeera Airways has historically made the majority of its profit in the second half of its financial year, particularly the final quarter, with the carrier, in May-2010, stating it remained confident of reporting a profit in 2010 (no further updates on the 2010 outlook have been provided since then).

Meanwhile, recent efforts by Jazeera to reduce costs and overcapacity also have shown signs of success, with the carrier, in response to its overcapacity problem, in late 2009 announcing a restructuring of its marginal or loss making routes, shelving several destinations and reducing others to peak season services. 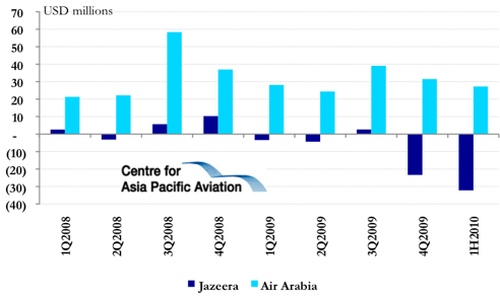 Both Air Arabia and Jazeera shares have been negatively affected in 2010, with Jazeera faring much worse than AirArabia. 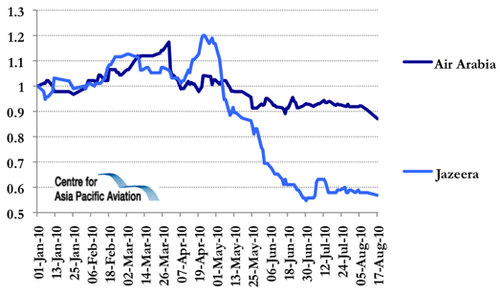 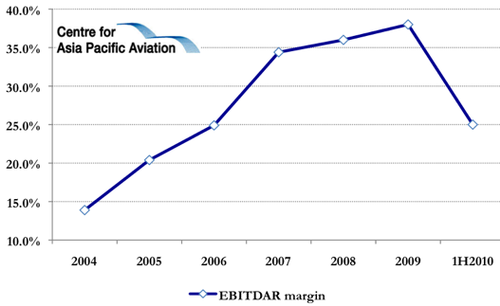 The sharp reductions occurred despite a 4.0% increase in revenues (to USD263.2 million) and continued passenger growth, and as costs increased 15.5% to USD239.3 million (average crude oil prices increased 31% in the second quarter to USD78.05/barrel), with the carrier commenting that the “decline in profitability was in line with global industry performance”. 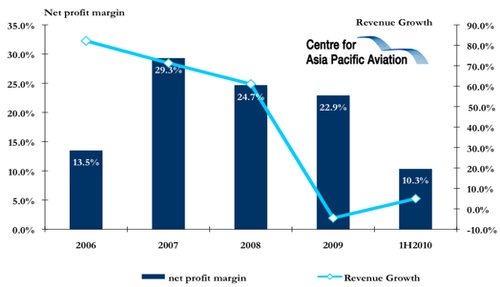 Source: Centre for Asia Pacific Aviation & Air Arabia
Based on the conversion rate at USD1 = AED3.6735 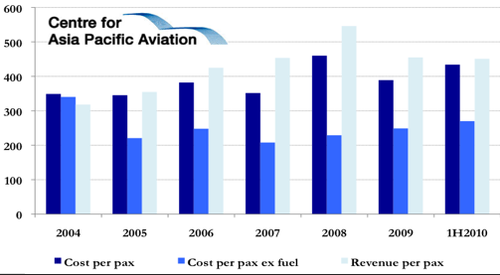 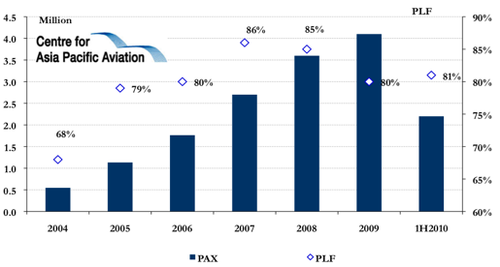 Air Arabia continues to expand despite the current challenges, with the carrier, during the first half, operating to 65 destinations (up from 45 at the end of 2009) – 48 from Sharjah, 12 from Casablanca and five from Alexandria.  This represents a 48% increase from the 2008 network. 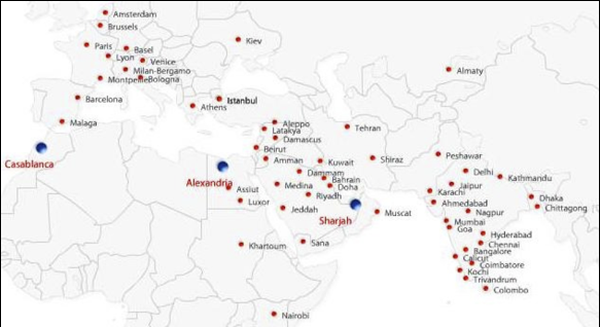 The Indian Subcontinent is the largest geographical region for the carrier, followed by Europe destinations (20%) and non-GCC Middle East destinations (19%). 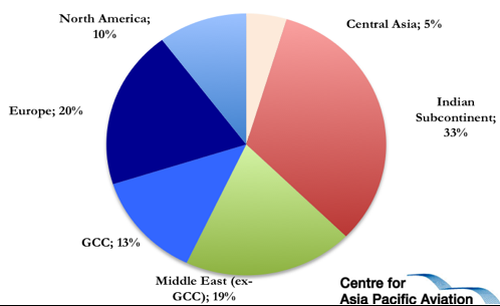 Despite the addition of the 20 new destinations in the first half of 2010, Air Arabia’s fleet increased by only two aircraft, for a total of 23 aircraft. 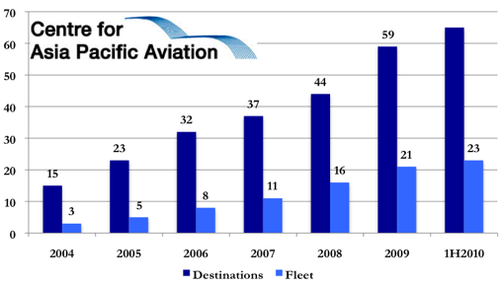 However, the carrier has notable fleet expansion plans, having 44 A320s on order, to support its three bases in Sharjah (currently with 18 aircraft), Casablanca (three aircraft) and Alexandria (two aircraft).

The carrier has entered into a contract with Airbus for the purchase of 34 A320 aircraft, with options for a further 15 aircraft, out of which the Group has exercised the option to purchase ten aircraft. The total value of the 44 aircraft is valued at approximately USD3.5 billion) at list prices. As per the contract, 20% of the purchase price of 44 aircraft is payable over the next five years, with the balance being due on delivery.

Air Arabia Maroc COO, Rohit Ramachandran, earlier this year, stated AirArabia Group’s order for 44 Airbus aircraft, scheduled for delivery over the next five years, may not be sufficient for the expansion. Air Arabia Maroc alone plans to add two aircraft to its Casablanca fleet in 2010, and, if market conditions permit, would add three aircraft p/a until its reaches 17-20 aircraft.

Mr Ramachandran added: “If anything [the Airbus deliveries] won’t be able to keep up with our requirements for the three hubs. At least in the next couple of years we see our demand for airplanes outstripping the schedule. We might even have to go outside. But we are in a good position right now because good airplanes are available cheap”.

Air Arabia still leads all other airlines in terms of operational efficiency, according to the LCC, with the carrier stating it has achieved an aircraft utilisation rate of over 14 hours per day in the year-to date period, becoming the most efficient operator of A320 equipment. 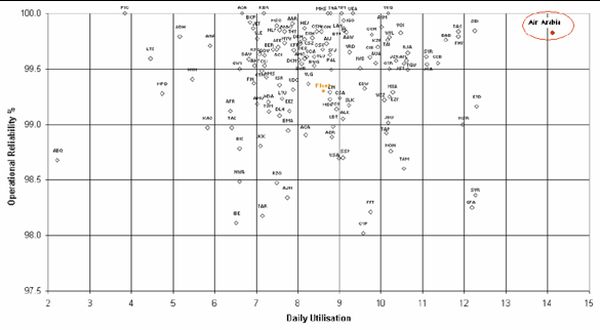 A JV between Air Arabia and the Travco Group (the Middle East’s largest travel and hospital group), Air Arabia Egypt will shortly expand further its range of destinations to key cities across the Europe, Middle East and Africa (EMEA) regions. Air Arabia operations from Egypt will commence with two aircraft.

Formed as a cross-border joint venture between Sharjah-based Air Arabia and the Travco Group, Air Arabia Egypt is a LCC based at Burj Al Arab International Airport in Alexandria. With its fleet of A320 aircraft, the airline offers scheduled service to destinations in Africa, with plans to commence service to the Middle East and European  destinations. The venture is another application of the cross-border JV model and part of Air Arabia's aims to expand its presence beyond its home market of Sharjah in the UAE.

Details of Air Arabia associates: as at Jun-2010

Meanwhile, Jazeera Airways reported a loss of USD15.8 million in the three months ended Jun-2010 and a USD32.2 million loss in the six months ended Jun-2010, compared with losses of USD4.4 million and USD7.8 million, respectively, in the previous corresponding period. The quarter loss marks the third consecutive quarter of losses for the carrier. 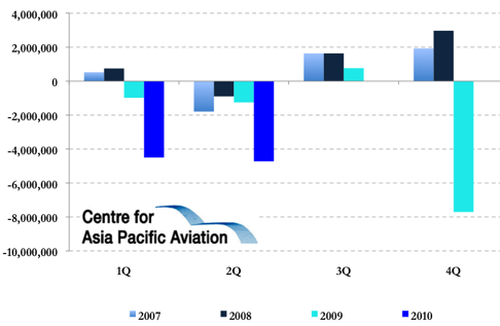 The carrier added that total assets increased 119.5% in the period, to USD583 million, although shareholders equity decreased 60% to USD36 million.

Back in May-2010, COO, Reinhard Kossack, stated the carrier still expected to report a profit in 2010, stating: “I am sure that we will be in the black this year”. This would imply a significantly improved second quarter for the carrier.

Meanwhile, Jazeera stated it is now less dependent on financing with the full takeover of Sahab Aircraft Leasing Co in Feb-2010 for USD88.4 million. The carrier, in May-2010, received shareholder approval to fund the acquisition of Sahaab Aircraft Leasing, by almost doubling the carrier’s capital to USD144.8 million through a rights issue of 200 million shares.

The acquisition marks the first step execution of the airline’s phased vertical integration strategy, which is based on investing in services that enhance its commercial offerings and growth prospects. Sahaab will continue to operate as a subsidiary of Jazeera Airways.

Air Arabia and Jazeera will likely benefit from a second half, as traffic demand and premium traffic continues its grow (with the Middle East traffic continues to forge ahead of global trends) in the traditionally strong second half, and yields return, after a yield dilution in the Middle East of approximately 12-15% in 2009, according to AirArabia.