GKN Aerospace and Meggitt have both released bullish assessments of the outlook for the commercial aerospace markets.

GKN CEO, Kevin Smith, stated, “Global air traffic and airline profitability are up and lease financing has returned, which is now underpinning order books”, adding, “Our main customers are quite bullish about increased production rates next year and there are new aircraft coming, so I'm optimistic on the outlook."

Meggitt CEO, Terry Twigger, stated, “Sales of spares and repairs picked up in the last quarter and it looks as if the recovery in the aerospace sector is soundly under way," but cautioned that conditions were still challenging.

Meggitt announced a small rise in underlying interim pre-tax profits despite a 6% fall in revenue and raised its 2011 cost-cutting target. Revenue totalled GBP549.7 million, which compares with GBP586.4 million in the same period last year. Underlying pre-tax profit reached GBP116.2m, which compared with GBP112.3 million in 1H2009. GKN reported a return to first-half profit, driven by growing aerospace and automotive sales as well as a cost cutting programme.

Goodrich Corp stated it reached an agreement to acquire the Cabin Management assets of DeCrane Holdings Co, a provider of seating, furniture, veneers and cabin management systems for the business jet market. The transaction does not include the aircraft completions business of DeCrane. The USD280 million deal is expected to close this month. 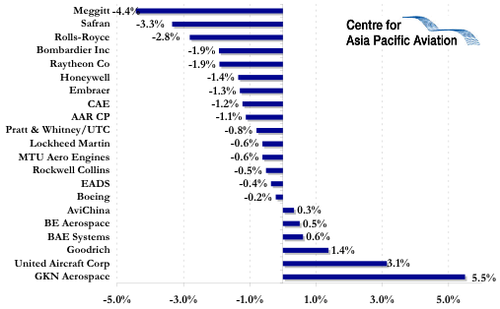