Aeromexico has made significant improvements to its long haul operation following the transition to 787s on two of its three European routes and schedule changes on its two Asian routes. Further improvements are expected as Aeromexico takes delivery of additional 787s, enabling it to phase out its remaining 767s and 777s and pursue growth.

London, which was launched in late 2012 with three weekly 767 frequencies, has performed particularly well since the transition to 787s in 2014, prompting the carrier to add two more frequencies. The new five times per week schedule gives Aeromexico a better product for the key corporate market.

Aeromexico hopes eventually to serve all its long haul markets, including Shanghai and Tokyo, with at least five weekly flights and potentially a daily service. Newly available higher thrust ratings for its 787-8s will also enable Aeromexico to begin serving Tokyo non-stop from Mexico City by the end of 2015.

Aeromexico’s long-haul network currently consists of eight destinations, including three in Europe (London, Madrid and Paris), two in Asia (Shanghai and Tokyo) and three in lower South America (Buenos Aires, Santiago and Sao Paulo). A ninth long-haul destination, Rio de Janeiro, was dropped in late Jun-2015, only one year after the four times per week service was launched.

The 767 fleet is similarly deployed on one medium-haul route, Mexico City-Caracas. Aeromexico also previously used 767s for medium-haul flights to Bogota and Lima but has switched these routes over the last year to an all-737 operation.

With the recent suspension of services to Rio de Janeiro, Buenos Aires and Caracas are currently left as the only two destinations that are still served with 767s. Aeromexico is planning to phase out its remaining 767s over the next few months.

Mexico City-Caracas is scheduled to transition from 767s to 737-800s from the end of Jul-2015. Buenos Aires is currently scheduled to become an all 787 destination at the end of Sep-2015 after Aeromexico takes delivery of its eighth 787-8.

The 787 fleet currently generates about 131 million weekly ASKs, which represents about 25% of the group’s international ASKs and about 17% of its total system-wide ASKs. The ASKs generated by the 787-8s will increase to about 141 million in Oct-2015 after the last 767s are phased out. This represents about 28% of the Aeromexico Group’s international ASKs and 18% of its total ASKs (includes ASKs generated by regional subsidiary Aeromexico Connect). 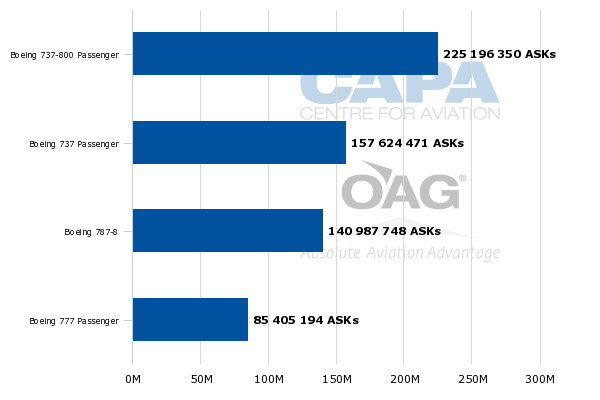 The phase out of the 767s is a major milestone for Aeromexico; it has been the backbone of its long haul operation for more than two decades. The carrier took its first batch of 767s in 1991 as replacements for its DC-10s. At the peak Aeromexico operated 10 767s.

As CAPA previously highlighted, Aeromexico’s per seat costs have dropped by about 25% on flights it has transitioned from the 767 to 787-8. Unit revenues have also increased as Aeromexico has been able to leverage an improved long-haul product, particularly in the premium cabin. Aeromexico configures its 787s with 243 seats, including 32 lie-flat seats in business. Its 767s are in various configurations but the average is about 190 seats.

Mr Conesa said Aeromexico plans to gradually remove its 777s in 2016, 2017 and 2018. Aeromexico has operated 777s since 2008 and currently has three in active service and one parked aircraft, according to the CAPA Fleet Database.

The 787-9s will be used to replace 777s on Madrid, Sao Paulo and Shanghai. But the planned fleet of 11 aircraft also enables significant growth of Aeromexico’s long-haul operation over the next five years.

New long-haul routes will likely be launched with 787-8s, which are ideal for long and thin markets. Aeromexico could potentially free up 787-8s for new routes by up-gauging existing 787-8 routes to the 787-9.

Aeromexico now routes its Mexico City-Tokyo flights via Monterrey in northern Mexico while the return flights operate non-stop. Aeromexico has seen the profitability of its Tokyo service improve by about USD8 million per year after it switched the stopover from Tijuana to Monterrey in Sep-2014 but it expects further improvements from a non-stop operation in both directions.

Tijuana had virtually no local passengers while Monterrey-Tokyo has a sizeable local market, thanks to the ties between the Japanese and Mexican automotive industry, which has several facilities in the Monterrey area. While Monterrey passengers will no longer have a non-stop option to Tokyo Aeromexico believes it will still be able to carry these passengers via Mexico City. Aeromexico competes mainly against US carriers in the Japan-Mexico market but transiting in the US is cumbersome and Mexican passengers would generally prefer transiting in Mexico City.

Mr Conesa expects Aeromexico will be operating non-stop flights from Mexico City to Tokyo by the end of 2015, at which point it will have at least five 787-8s that are retrofitted with higher thrust engines. Aeromexico has been waiting for over two years for the long promised improvement in take-off thrust, which is necessary for non-stops with full payload to Tokyo from the high altitude of Mexico City.

The thrust upgrade finally became available in Jun-2015, enabling Aeromexico to start retrofitting its existing fleet. But Aeromexico wants to wait until it has five aircraft upgraded before making the switch to non-stops.

A non-stop in both directions is expected to improve demand, including from connecting markets beyond Mexico City, and eventually enable Aeromexico to add additional frequencies to Tokyo. Aeromexico over the last year has been bolstering its operation to regional international destinations in Central America in a bid to bolster transit traffic. The additional feed should facilitate expansion of Aeromexico’s long-haul network including potentially more frequencies to Tokyo and Shanghai

Aeromexico already upgraded Shanghai from two to three weekly in Jun-2014 but sees growing demand in the Mexico-China market which should eventually support a further upgrade. Aeromexico still stops all its Shanghai flights in Tijuana in both directions and plans to continue with the current routing as the 787-8s or 787-9s will not be able to operate the flight non-stop even with the higher thrust rating.

Aeromexico however has seen an improvement in profitability of its Shanghai service after retiming its Shanghai flights a few months ago. Aeromexico now departs from Shanghai in the afternoon. Previously it had a morning departure which was unideal as it was too early to connect with domestic flights.

Aeromexico is now working more closely with SkyTeam partner China Eastern, which is providing domestic feed and helped it secure new slots at Shanghai Pudong. Mr Conesa said the focus is now on domestic connections rather than using Shanghai-based China Eastern for international connections to Southeast Asia, pointing out there is growing demand in the China-Mexico market as business ties between the countries is increasing.

The Chinese domestic connections are key as a large portion of the passengers travelling from China to Mexico are not originating in Shanghai. Demand should be sufficient within the next year or two to support additional frequencies, which will also give Aeromexico a better product for the business sector. Aeromexico mainly competes with US carriers in the China-Mexico market and while a US transit stop is less convenient than the Tijuana stopover the lack of frequency is now a disadvantage for Aeromexico.

Aeromexico experienced an improvement in demand as the 787 product was introduced, prompting it to decide to add two more frequencies. The fourth frequency to London was introduced at the end of Mar-2015 and the fifth flight was introduced in mid-Jun-2015.

Aeromexico’s share of the non-stop capacity between Mexico City and London has increased over the last year from 28% in Jul-2014 to 36% in Jul-2015. British Airways, which currently operates a daily 747-400 flight to Mexico City, accounts for the remaining 64% share of seat capacity. 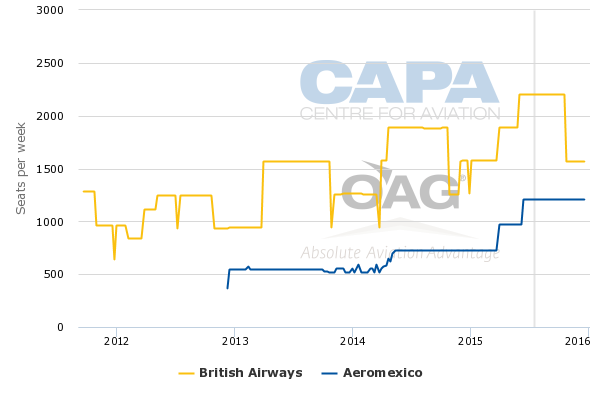 With five 787 flights Aeromexico believes it has now sufficient schedule and the right product to compete for corporate traffic, which is particularly important in the London market. British Airways previously had an advantage in the Mexico City-London corporate market as it serves the route daily.

Aeromexico improves its position in the European market

Aeromexico operates up to 11 weekly flights to Madrid, depending on the time of year, but most flights are still operated with 777s. Iberia currently operates two daily flights on the Mexico City-Madrid route with A340-500s.

Spain is by far the largest European market from Mexico and is Mexico’s fifth largest international market overall after the US, Canada, Colombia and Panama. About 72,000 passengers travelled between Mexico and Spain in May-2015, according to Mexican DGAC data.

Mexico’s international markets (excluding US) ranked by monthly passengers: May-2014 vs May-2015

European carriers collectively flew 186,000 passenger to and from Mexico in May-2015, according to Mexican DGAC data. This represents a 1% drop from May-2014.

Aeromexico has been growing its European traffic and is keen to continue closing the gap with European carriers. Aeromexico currently has a 23% share of non-stop seat capacity between Mexico City and Europe, putting it only slightly ahead of Iberia’s 21% share although Iberia only operates from Spain. 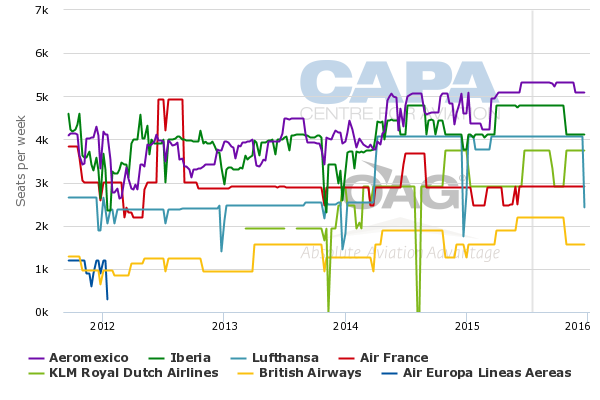 Lufthansa currently has about an 18% share of non-stop seat capacity between Mexico City and Europe, followed by KLM with 16% and Air France with 13%, according to CAPA and OAG data. British Airways is the smallest player with a 10% share but it still has almost twice as much capacity on Mexico City-London than Aeromexico. At a group level BA parent IAG also has a leading 32% share of seat capacity between Mexico City and Europe, putting it slightly ahead of Air France-KLM’s 29% share.

Aeromexico currently has about 15,500 weekly one-way seats to Europe, which represents about a 5% increase compared to Jul-2014. Aeromexico expects to continue adding capacity to Europe as it grows its 787 fleet.

Aeromexico has been expanding its Central American operation over the last year as part of an effort to increase transit traffic. Aeromexico launched services to Managua in Dec-2014 and to Panama City in May-2015. It also has added capacity to existing destinations, including doubling capacity to San Jose in Costa Rica from Nov-2014.

Aeromexico currently has 15,500 weekly seats in the Mexico-Central America market. Copa is still the market leader with a 47% share of seat capacity between Mexico and Central America. Copa will see its share again reach 50% in Aug-2015, when the Panamanian carrier launches services to Puebla and Villahermosa, giving it six destinations in Mexico.

Copa also competes against Aeromexico in the US-Latin America connection market. Typically Aeromexico has been a small player in this market while Copa relies heavily on connections beyond Panama City. But Aeromexico has significantly increased its transit traffic beyond Mexico in recent years and is keen to further expand this component.

Aeromexico says 31% of its Mexico City passengers now connect beyond Mexico City, compared to only about 15% three or four years ago. Mr Conesa told CAPA that Aeromexico aims to further increase its transit component to the higher 30%s. 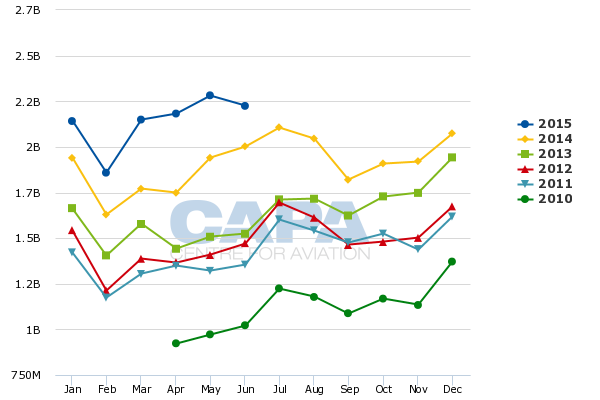 Aeromexico will continue to rapidly expand international capacity over the next few years as its widebody fleet grows from 10 aircraft currently to 19 aircraft. There will also be more regional international growth using the group’s new fleet of 737 MAX aircraft.

Managing the additional capacity could be challenging for Aeromexico. But with the new 787-8 fleet and other adjustments Aeromexico has been able to improve its long haul performance significantly, particularly in the London and Tokyo markets. This gives Aeromexico confidence it can profitably grow its long haul operation over the next few years, enabling it to increase market share and improve its overall outlook.