Aeromexico recorded a sharp drop in profits in 2Q2014 as market conditions in Mexico became unfavourable. An economic slowdown has coincided with rapid capacity expansion by Aeromexico and the overall Mexican market, putting pressure on yields.

Aeromexico’s capacity was up by 17% in 2Q2014, driven by a 27% spike in international ASKs. The group has adjusted domestic capacity, which was up by less than 3% in 2Q2014, but competitors continued to pursue aggressive domestic expansion.

Despite the relatively disappointing results Aeromexico has been consistently profitable over the past four years and boasts the highest margins in the Mexican airline industry. Challenging market conditions are likely to persist over the short term but the group’s medium to long term outlook is relatively bright. Following its recent market share gains Aeromexico should be in prime position to benefit as the Mexico economy improves and competition becomes more rational.

Grupo Aeromexico on 28-Jul-2014 reported a net loss of MXP89 million (USD7 million) for the quarter ending 30-Jun-2014 compared to a net profit of MXP322 million (USD26 million) in 1Q2013. The net figure was impacted by the devaluation of the Mexican peso, which depreciated by 4% against the US dollar compared to 1Q2013.

On an operating basis, Aeromexico extended its streak of consecutive profitable quarters to an impressive 17 as the group turned an operating profit of MXP202 million (USD16 million). However this represented a 73% reduction compared to 1Q2013 as intensifying competition led to declining yields. 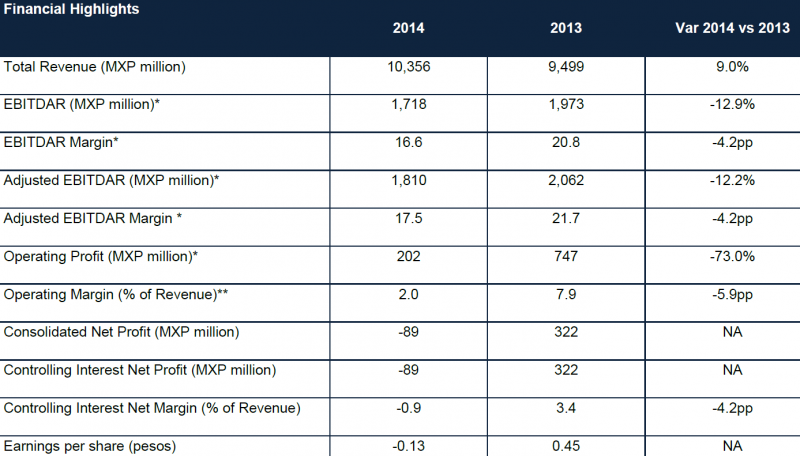 For the six month period RPKs were also up 22% while ASKs were up 15%, resulting in a 4.6ppts improvement in load factor to 79.3%. Yield in 1H2014 were down 13% as there was a slight improvement in the second quarter compared to the first quarter.

Aeromexico executives are encouraged by the sequential quarter over quarter improvement in yields and said during a 29-Jul-2014 analyst call that they are optimistic of further yield improvements in 2H2014. But overall yields still remain under pressure in both the domestic and international markets.

Domestically Aeromexico has adopted an aggressive pricing strategy in response to intensifying competition. Mexico’s economy expanded by less than 2% in 1H2014 but the Mexican domestic market grew by 9% to 15.4 million passengers, according to Mexico DGAC data.

Aeromexico’s aggressive pricing strategy is aimed at ensuring the group maintains or increases its share of the domestic market share despite the more rapid capacity growth from competitors. The group’s domestic capacity was up by only 2.5% in 2Q2014 as a new more disciplined approach to capacity was implemented. As CAPA previously analysed, the group earlier revised its domestic capacity projections for 2014 from 9% to 12% ASK growth down to 7% to 10%.

The lower fares are designed to match competitor fares and boost load factors at the expense of yield. For example, Aeromexico executives explained that it has matched Interjet’s fares on the LCC’s newly launched routes from Monterrey, which traditionally have been among the highest yielding domestic routes in Mexico. This follows a similar strategy used in other markets as Aeromexico’s rivals have entered new routes with aggressive pricing and capacity.

Clearly the higher load factors are not sufficient to entirely offset the drop in yields. But the group believes maintaining market share as competition intensifies is paramount.

The Aeromexico Group carried 37.2% of all domestic passengers in Mexico in 1H2014 compared to 35.3% in 1H2013, according to Mexico DGAC data. All three of Mexico’s LCCs – Interjet, Volaris and VivaAerobus – lost ground to Aeromexico as their passenger growth lagged the 15% growth from Aeromexico.

Interjet, which has been expanding rapidly on regional routes using its new fleet of Sukhoi Superjet 100s, grew scheduled domestic passenger traffic by only 4% in 1H2014 to 3.65 million, according to Mexico DGAC data. Volaris’ domestic traffic grew by 11% to 3.55 million while VivaAerobus’ domestic traffic dropped by 1% to 1.78 million.

Volaris reported an operating loss of USD7 million and a net loss of USD6 million for 2Q2014 but this represents a significant improvement compared to the USD95 million operating loss and USD75 million net loss in 2Q2013. Volaris’ yield was down by 10% as revenues were up only 9% to USD254 million despite a 14% increase in RPKs. 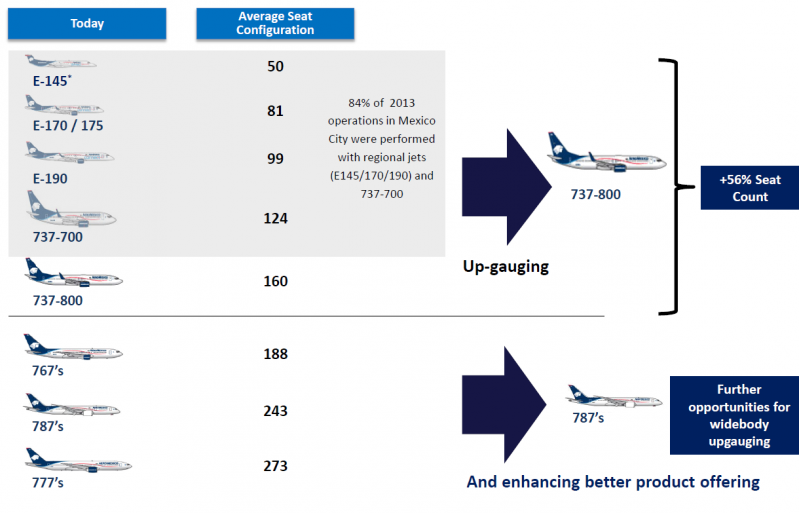 Aeromexico has been focusing expansion this year in the international market, which is not as competitive and with the exception of a few trans-border routes to the US, has not seen the irrational capacity increases that has plagued the domestic market.

While Aeromexico competes against three ambitious LCCs in the domestic market and to the US, it is Mexico’s only long-haul carrier. Interjet and Aeromexico are also the only two Mexican carriers currently operating international flights to Latin America and the Caribbean.

Aeromexico’s international ASKs were up 27% in 2Q2014 and 21% in 1H2014. As CAPA formulated in Jun-2014, the international capacity growth has been driven by the delivery over the past year of Aeromexico’s first five 787s, which have been used to up-gauge long-haul routes previously served by smaller 767s.

Aeromexico executives acknowledge the rapid capacity expansion on routes such as Madrid, Paris London and Tokyo have impacted yields. But they maintain the 787 has been well received in the market place, new revenue management initiatives are starting to bear fruit and the influx of capacity that has been added to the market over the past year will eventually be fully absorbed.

Aeromexico to serve Tokyo from Monterrey

Aeromexico also confirmed during the 2Q2014 analyst call that it is moving the stopover on its Mexico City-Tokyo flight from Tijuana to Monterrey in Sep-2014. Aeromexico executives are optimistic the switch will improve the performance of the Tokyo route, where capacity has nearly doubled as a result of the transition to 787s as well as the introduction of a fourth weekly frequency.

A very small portion of Tokyo-bound passengers were boarding at Tijuana. Monterrey should see higher local demand given it has a larger business community with stronger ties to Japan. Monterrey is also Aeromexico’s second largest hub and has been the focus of domestic and short-haul international expansion. Aeromexico also has announced the addition of five new domestic routes from Monterrey.

However, the new Monterrey-Tokyo route throws a wrench into plans to upgrade Tokyo to non-stop in 2015 using a new batch of 787-8s which have higher rated engines. Aeromexico currently does not have any aircraft capable of operating non-stop from the high altitude of Mexico City to Tokyo but operates non-stop from Tokyo to Mexico City (which it will continue to do as the stop on the outbound leg moves from Tijuana to Monterrey). The idea of the previously planned non-stop in both directions was to offer an improved product in the local Tokyo-Mexico City market as well as offer better connections beyond Mexico City to points throughout Latin America.

With the Monterrey stop Aeromexico will end up continuing to offer a less competitive two-stop product in the growing South America-Tokyo market. This will dilute Aeromexico’s ability to better leverage its position as the only Latin American airline serving Asia.

Even with the recent acceleration in international capacity growth, Aeromexico only accounted for 14.6% of Mexico’s international market in 1H2014 based on Mexico DGAC passenger data. But this represents a 2.2ppts improvement over the 12.4% share the group captured in 1H2013.

While the fast rate of Aeromexico’s international capacity expansion has impacted its yield and profitability it is likely these are only short term issues given how small its market share is. A 15% share for any flag carrier in its home market is miniscule. There are huge opportunities for Mexican airlines to improve their position in the international market. Aeromexico in particular should benefit as it is Mexico’s only full-service airline and only widebody operator.

Overall the group’s market share in Mexico has been on the rise despite the intense competition with its LCC competitors. Emerging markets typically see full-service airline market shares steadily slide as LCCs expand. Mexico has been an exception with Aeromexico steadily expanding its overall share of the Mexican market over the past 18 months.

Aeromexico monthly market share (% of scheduled passengers carried) by sector: Jan-2013 to May-2014

Aeromexico's outlook should brighten after a challenging 2014

Aeromexico also has been consistently more profitable than its LCC competitors. Mexico’s LCCs are generally well positioned for growth. But Mexico’s LCC sector, which features three airlines with ambitious expansion plans, could become oversaturated. Consolidation is a possibility.

While Aeromexico has seen declining profits so far in 2014, the group’s medium to long term outlook is relatively bright. The airline is hopeful economic growth in Mexico will return to more normal emerging market levels in 2015, boosting demand.

At least for now Aeromexico is being “cautiously optimistic going forward,” according to CEO Andres Conesa. He said the group has not finalised its capacity plans for 2015 but expects to reduce overall ASK growth to the single digits compared to a projected 12% to 15% in 2014.

International capacity growth, which is expected to be up 15.5% to 19% in 2014, will be moderated significantly, allowing the capacity added in the first 18 months of 787 operations to be absorbed. Domestic capacity growth will be pegged to roughly two times GDP growth.

Aeromexico vows to monitor demand closely and readjust capacity, including for the rest of 2014, if market conditions warrant. Aeromexico has the flexibility in its fleet plan to quickly adjust capacity. For example the airline recently adjusted its 2014 fleet plan by accelerating the retirement of two aircraft (see background information).

If Aeromexico maintains its so called disciplined approach its outlook should improve. But a lot hinges on competitor behaviour and an economic rebound. 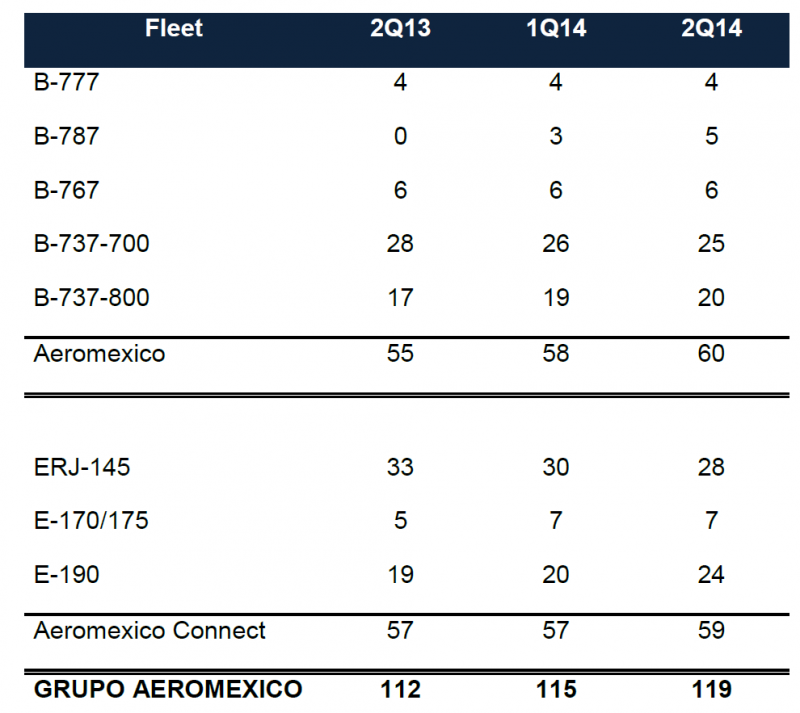 The decision to accelerate the two retirements is sensible given current market conditions. It also shows the flexibility in Aeromexico’s fleet plan, which allows the group to adjust fleet and capacity growth depending on market conditions.