Grupo Aeromexico has a raft of initiatives under way to sustain and improve its fortunes in the Mexican aviation market, where traffic is growing despite uncertain economic conditions.

Mexico faces an uphill climb to meet its GDP growth forecast of 3% in 2014 as Aeromexico recently noted that Mexico’s general economic indicator only grew 0.9% in Jan-2014 versus 3.2% growth a year earlier.

Despite the economic challenges facing Mexico, Aeromexico remains bullish on the untapped potential for air travel that lies within the country’s growing middle class. In order to ensure it maintains a competitive edge in capturing its fair share of latent demand for air travel, Aeromexico is working to distance itself from its rivals by leveraging its network strength and improving its cost and revenue management.

Even as the Mexican economy does not seem to be rebounding as quickly as some forecasters initially hoped, Aeromexico recently cited statistics from the country’s DGAC showing that domestic air passenger traffic increased 10.5% year-on-year during the first two months of 2014.

But a change in Aeromexico’s revenue management strategy and likely softness in pricing traction is creating pressure on the carrier’s yields, a trend that began taking hold in 2013. The carrier started in 2013 trading loads for yields to boost its load factor to capture back some domestic market share lost to fast-growing carriers Volaris and Interjet.

The trade-off has resulted in Grupo Aeromexico (including regional operator Aeromexico Connect) sustaining a leading market share in the domestic market for the 12M ending Mar-2014 of nearly 27%, and a 26% share for international and domestic market combined.

During 1Q2014, Aeromexico’s yields dropped 13% and unit revenues fell 5%. The carrier noted that 1Q is typically a seasonally weak period for Aeromexico. But its yields have been trending downward due to a shift in its revenue management strategy. In 4Q2013 the airline’s yields fell 7%, and in 3Q2013 they fell by 8%. 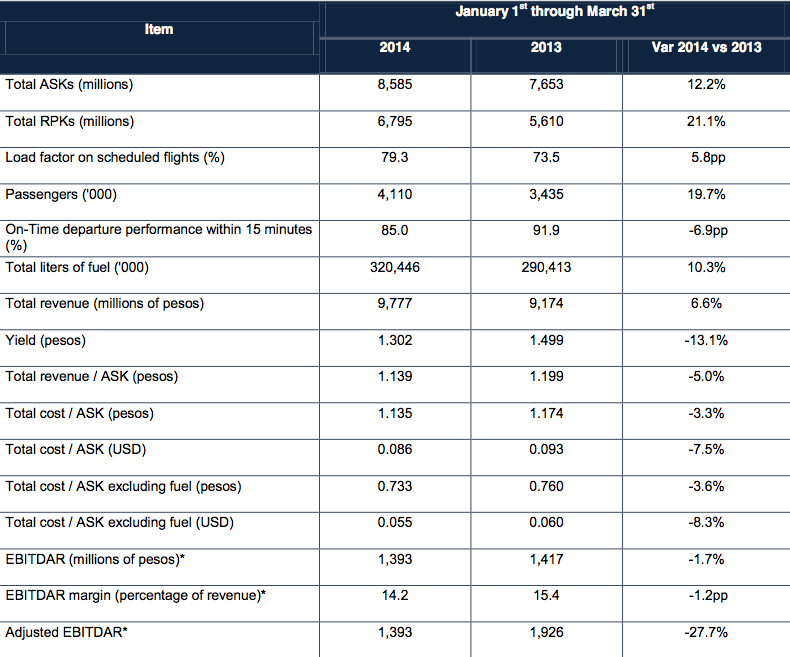 Highlighting certain nuances of the shifts Aeromexico is making to its revenue management strategy, CFO Ricardo Sanchez Baker recently explained that the airline has changed its pricing structure for flights booked further out from a departure date. Roughly a year ago Aeromexico was charging the same price for a ticket booked three months in advance as travel booked just one day prior to travel with no discounts given for an earlier booking.

Mr Baker concluded that by discounting prices for travel booked further out in advance Aeromexico could expand its base of cost-conscious passengers, which has worked well to bolster the carrier’s load factors (and no doubt pressured Volaris and Interjet). In 1Q2014 Aeromexico’s loads increased 5.8ppt to 79.3%.

Aeromexico’s CFO believes the market has responded well to changes it its revenue management strategy. Although yields have fallen Mr Baker believes the changes create a “much more sustainable strategy going forward”.

Another facet of Aeromexico’s strategy to remain competitive is improving its position at Mexico City Juarez International Airport. By YE2014 the carrier is eliminating all 50-seat Embraer ERJ-145s from Mexico City to maximise slots at the airport and bolster connections.

Aeromexico’s changes in Mexico City result from less volatility in slots at the airport, said Mr Baker. Previously less certainty regarding slots prohibited the carrier from maximising connectivity at Mexico’s largest airport. But now Aeromexico has firm slots in place for at least one to two years, said Mr Baker, which will allows the airline to build a better bank structure at Mexico City Juarez.

Previously, Aeromexico stated it would grow from six to 10 banks at Mexico City, but Mr Baker recently outlined a planned 12 bank structure to accommodate the slot distribution.

Mr Baker estimates that Aeromexico only accounted for about 40% of the total seats on offer from Mexico City in 2013, and the carrier intends to grow its share to 50% during the next three years. He concluded that Aeromexico has an edge over its domestic competitors that operate Airbus A320s to Mexico City since there is no room for those carriers to upgauge to further exploit their slots at the airport.

Going forward, Aeromexico aims to sustain what it deems as a cost advantage among full-service carriers in the Americas. Aeromexico touts itself as Mexico’s only full-service carrier. The airline offers long-haul flights to Europe and Asia with widebody aircraft and also has more than a single class offering.

It estimates unit costs excluding fuel of USD7.5 cent for CY2013, which was lower than other carriers in the Americas including LATAM Airlines Group, Avianca and all of the three largest US network carriers.

Aeromexico's CY2013 unit costs versus its peers in the Americas 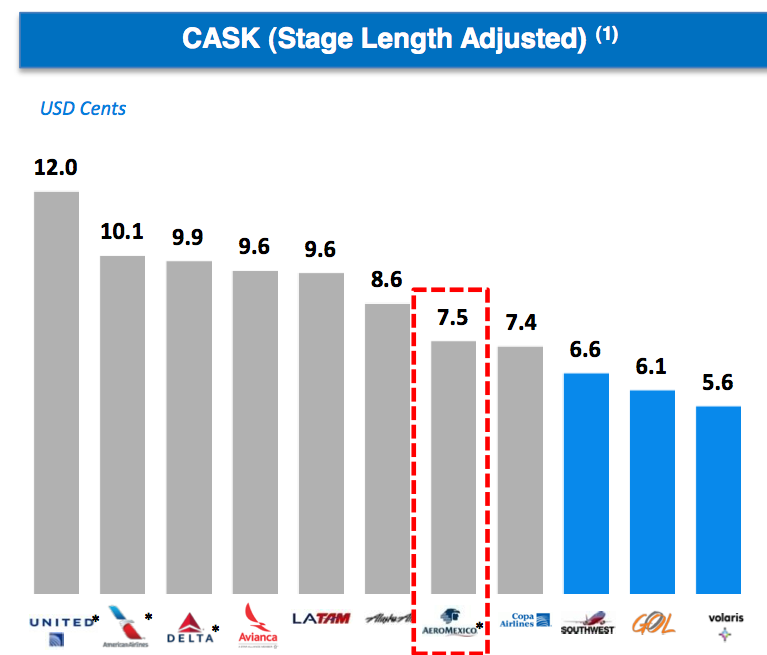 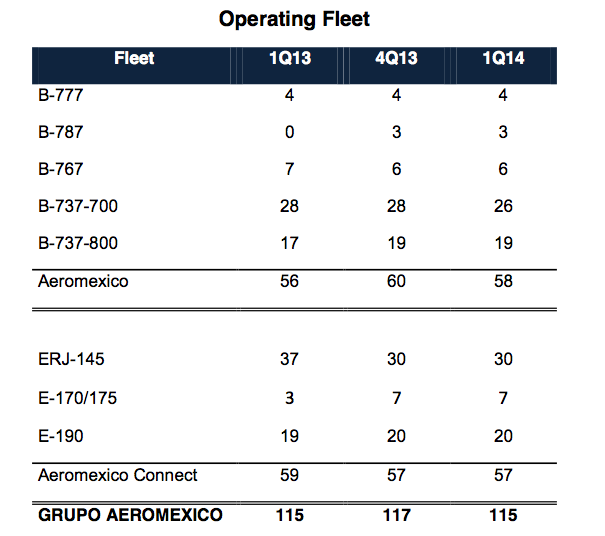 The airline believes the migration to larger-gauge aircraft coupled with an initiative in increase the number of owned aircraft should continue to generate continued cost savings.

During the rapid rise of Volaris and Interjet during the last few years in the wake of Mexicana’s demise, Aeromexico has largely remained Mexico’s dominant carrier. And during the last year the carrier has started to tout its superiority as it works to define its role in Mexico’s fast-changing aviation market.

As Mexico’s only full-service network carrier, Aeromexico has concluded it attains a revenue advantage over its rivals, touting this advantage over Volaris, which adopts more of an ultra low-cost business philosophy. During 1Q2014 Aeromexico believes it had a 55% higher unit revenue than Volaris (stage length adjusted for 1,000 miles) and a 44% better performance for CY2013.

Unit revenue performance at Aeromexico and Volaris: 1Q2014 and CY2013 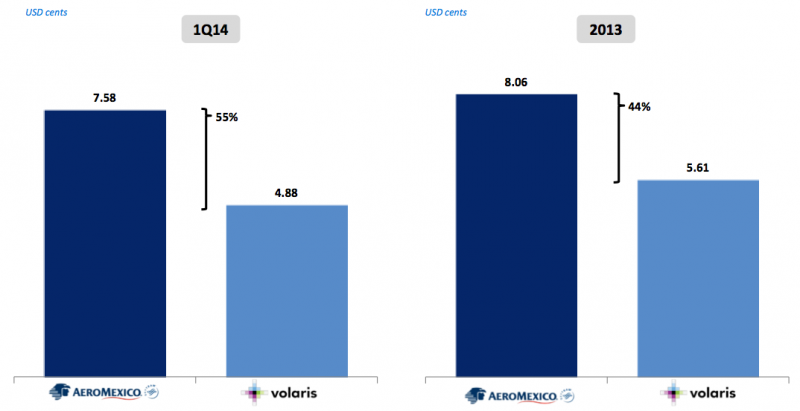 But in the short term Aeromexico and Volaris both recorded losses during 1Q2014 of USD7 million and USD28 million respectively, as market conditions remained difficult.

Mr Baker estimated that Aeromexico’s domestic competitors grew roughly 20% in CY2013 while Mexican economic growth notched up just 1%. He forecasts more conservative growth by those carriers of CY2014 of roughly 10%, and Aeromexico recently stated it has delayed the addition of some aircraft to its fleet in 2014 while continuing with planned redeliveries of aircraft scheduled to exit its operations in an effort to reduce its seat capacity.

The group has adjusted its domestic capacity growth for CY2014 to roughly 8%, down from previous estimates of 9% to 12% growth.

Even as uncertainty lingers over Mexico’s economy, Aeromexico remains confident that there is ample room for growth in the country’s commercial aviation industry. The carrier believes that the middle class should represent roughly 50% of Mexico’s population by 2025 and estimates that flights per capita in the middle and upper class in Mexico are 0.6, compared with 2.4 in the mature US market. 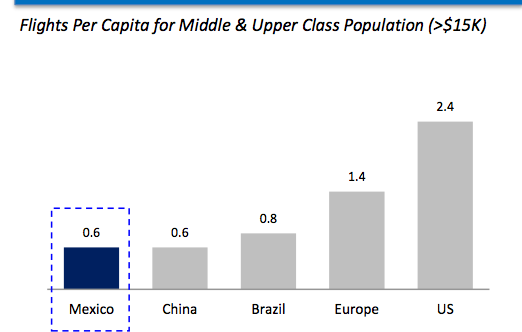 Those are no doubt promising statistics; but in the short term Aeromexico needs to navigate the challenges created by a unsteady economic environment and new competitors working aggressively to establish their rightful place in the Mexican market place.

It is a situation Aeromexico has now faced for a number of years, so it has a decent handle on the competitive landscape. With its larger network and close relationship with Delta Air Lines, Aeromexico appears to have an ample arsenal to defend its competitive edge.

Its biggest challenge is ensuring a high level of nimbleness to respond to challenging market conditions created by economic weakness and its ambitious competitors.