Aeroflot to be merged with other Russian carriers; Austrian and Vueling drop

European markets climbed for a third consecutive day, following gains in the mining sector. Also pushing the markets higher was euro-zone producer-prices data, which reinforced investors’ expectations the European Central Bank will next week keep its benchmark interest rate on hold, and data from the US in which housing sales improved in Dec-2009. As a result, airline stocks were pushed higher.

Iberia (+3.5%) and British Airways (+3.0%) continued to benefit from Goldman Sachs' comments the day prior stating the two are looking increasingly likely to proceed with merger plans in the near future.

The gain in share price was despite British Airways and its cabin crew union, Unite, commencing a High Court hearing during trading, in which Unite called for a permanent injunction preventing BA from imposing cost-cutting proposals, which it claims should be part of employees' contracts. The carrier advised cabin crew of the changes in Oct-2009, in which it proposed pay freezes, transitioning of staff from full time to part time and a reduction in cabin crew numbers on each aircraft, as a result of plans to cut cabin crew costs. The changes were later implemented on 16-Nov-2009.

In a statement, British Airways stated crewing levels are “inappropriate for incorporation into the personal contracts of individual”, adding that the changes are “reasonable” and it is “lawfully entitled to introduce them”. The carrier also advised the Court the changes would save the carrier GBP80 million over 18 months.

Aeroflot to be merged with other Russian carriers

Aeroflot (+0.9%) also made slight gains after Russian Transport Minister, Igor Levitin, announced several Russian regional carriers could be rolled into a single state-owned joint-stock company and then eventually merged with Aeroflot. The regional carriers could reportedly include St Petersburg-based Rossiya (and carriers merged under it), as well as Kavminvodyavia and Orenburg Airlines, which would initially be jointly managed by the state-owned Russian Technologies and Aeroflot.

The plan could reportedly be completed by the end of 2010 and would increase Aeroflot’s domestic market share from approximately 15-18% to 30-35%. An existing plan to merge Rossiya and the AirUnion carriers (including Vladivostokavia, Saratov and Sakhalin Airlines) into a new carrier, tentatively named RosAvia, under Russian Technologies, has been delayed a number of times and has been strongly opposed by Aeroflot. The AirUnion carriers were acquired by Russian Technologies in Sep-2008.

El Al (-1.8%) and Vueling (-1.7) were also down. Vueling CEO, Alex Cruz, recently stated the carrier is looking into new ways to further cut costs in 2010, despite expectations it reversed years of losses in 2009.

For more breaking news from Europe, why not have a look at today’s Europe Airline Daily? Other reports featured today include: 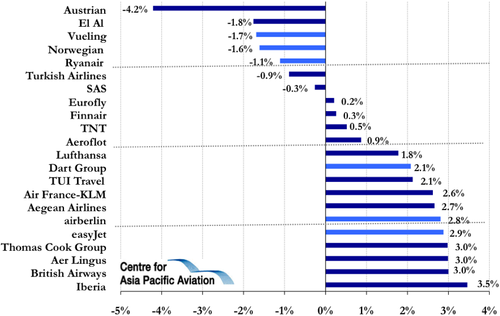