European airline shares continued to rise on Wednesday (17-Feb-2010), moving with the wider market, which rose for a third consecutive day on the back of strong US economic data and another day of gains in the banking sector, after the announcement of improved financial results from BNP Paribas and ING Group.

Aer Lingus (-4.0%) and Dart Group (-0.6%) were the only carriers to witness a drop in share prices on Wednesday. Aer Lingus reportedly plans to launch a staff ballot for its EUR97 million cost cutting plan next week, which includes pay cuts of up to 10% and 600 redundancies. The ballot comes after the carrier reached agreements with staff unions. Unions are hopeful they will receive enough voluntary redundancies to avoid compulsory job cuts.

Lufthansa (+1.3%) pilots union, Vereinigung Cockpit, announced plans to hold a four day strike for all Lufthansa pilots (including Lufthansa Cargo and Germanwings), commencing 22-Feb-2010, following failed negotiations at the end of 2009. The union has made demands on job security, seeking a guarantee Lufthansa services will not be replaced by recently acquired subsidiaries and their staff, and has insisted on a "greater say" on fundamental entrepreneurial issues, which Lufthansa stated it cannot accept, as it equates to "intervention in business management". The staff are also seeking a 6.4% pay rise. 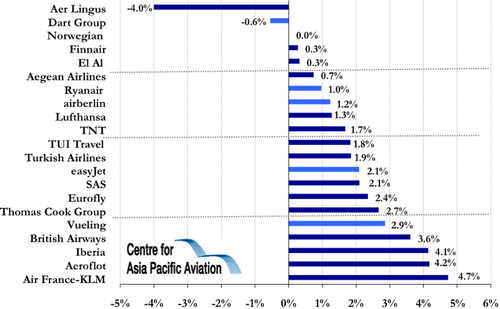