Russian national carrier Aeroflot has announced it is considering acquisition of the A320neo, joining Air France which as also confirmed it is looking at the reworked Airbus jet. Aeroflot has also confirmed it is drafting compensation proposals to be presented to the company’s board and to the Russian Federal Government over delays in the delivery of Sukhoi SuperJet 100 regional jets.

Aeroflot has firm orders for 30 SSJ100s and option or another 15, but has admitted it is also concerned in regards to the technical specifications of aircraft compared to the purchase contracts it signed. Aeroflot is due to commence SSJ 100 services on 15-May-2011.

Also in Eastern Europe, Wizz Air announced it is cutting capacity by 26% at Cluj-Napoca Airport. The carrier will redeploy one A320 to Tirgu Mures Transylvania Airport, opening the base earlier than originally intended. Wizz Air stated the decision follows the airline's recent dispute with Cluj Airport, which reportedly plans to increase charges for the carrier by 50%. Cluj airport management said Wizz Air's plan to move the capacity was unjustified, and the airport treats all airlines equally.

In Friday's stock trading, airberlin shares dipped 2.3%. The carrier's CFO, Ulf Huettmeyer, reportedly stated in an interview with Der Tagesspeigel that the carrier's 1Q2011 results have been damaged by the unrest in North Africa.

Aegean Airlines shares were up 2.6%. 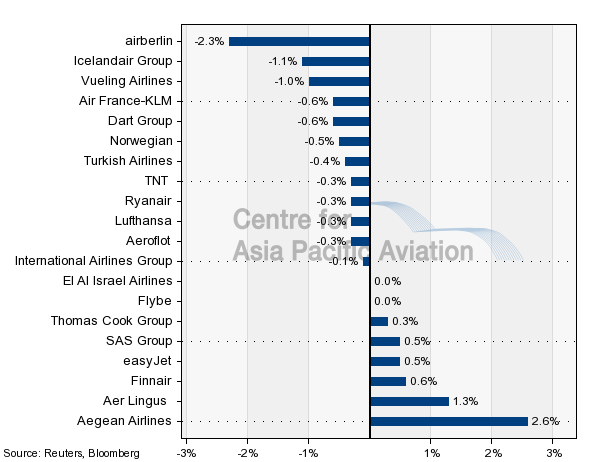