European carriers’ stocks were mixed on Wednesday (27-Jan-2010), due to a fall in banking shares, as investors became cautious ahead of the US Federal Reserve’s decision on interest rates, which were left on hold.

Alexander Lebedev sells minority stake in Aeroflot back to carrier

Aeroflot (+0.2%) shareholder, Alexander Lebedev, sold his 25.8% stake in the carrier, held by his National Reserve Corporation, back to Aeroflot for USD400 million, representing a 20% discount from the current market valuation.

Mr Lebedev plans to invest proceeds from the sale in “several projects”, including the purchase of new aircraft for Red Wings. Aeroflot is now reportedly considering selling Mr Lebedev’s stake for control of Rosavia and other Russian Technologies' assets. Mr Lebedev has also received approval to sell his 26% stake in Ilyushin Finance to VEB for USD175 million.

Aer Lingus (-4.0%) CEO, Christoph Mueller, confirmed during trading that the carrier is considering joining an airline alliance to expand its route network and attract further demand. Mr Mueller stated there is no preferred alliance at present, but stated oneworld and the Star Alliance would provide the best opportunities for expanded US services. The carrier withdrew from oneworld in 2007, due to a lack of revenue benefits.

Lufthansa (-1.0%) was also down despite Morgan Stanley raising its rating on the stock from ‘Equal-weight’ to ‘Overweight’ the day prior. 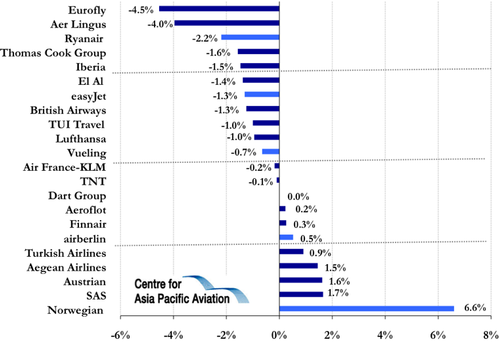