AerCap and Genesis Lease confirmed the rumours of an impending M&A agreement between them on Friday, announcing AerCap will acquire Genesis Lease in an all share-for-share transaction. The deal is still subject to shareholder and regulatory approval, but is likely to be completed sometime during 4Q2009.

Under the terms of the amalgamation agreement, Genesis shareholders will receive one AerCap ordinary for every Genesis share they own, at USD8.81 per share, a 45% premium over the price during the 30-day trading period from 31-Jul-2009 to 11-Sep-2009. Based on Genesis' balance sheet, the transaction has a value of USD1.75 billion.

Genesis will become a wholly-owned subsidiary of AerCap. AerCap's CEO, Klaus Heinemann, and CFO, Keith Helming, will lead the combined company, which will retain the name AerCap.

Once the deal is finalized, AerCap will become “the leading independent franchise within the global aircraft leasing sector”, with 358 commercial aircraft and 83 engines that are either owned, on order, under contract or letter of intent, or managed. It will have 116 airlines as clients, with a lease portfolio value of USD6 billion.

As part of the agreement, GE Capital Aviation Services (GECAS), which has acted as servicer for Genesis' portfolio, will continue to provide most asset management services for the Genesis fleet in the near term. However, AerCap and GECAS have agreed to a means to terminate this at AerCap’s option. AerCap has also signed an LoI to purchase 13 aircraft from GECAS.

BBA Aviation’s shares were down 4.1% on Friday. 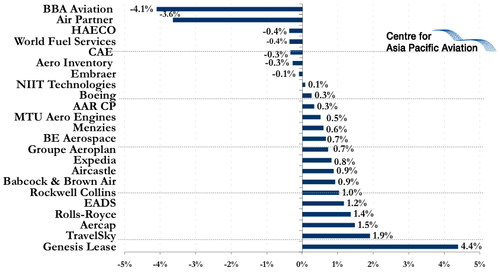