FQ2009 net income excluding the impact of the mark-to-market of interest rate caps and share-based compensation was USD40.3 million, compared to net income of USD18.7 million in the previous corresponding period.

AerCap CEO, Klaus Heinemann, stated that management used 2009 to "best position the company for the impending economic recovery”, by progressively growing and upgrading its fleet with the addition of USD1.9 billion of new aircraft. He stated, “our efforts have resulted in a 30% increase of revenue from leasing activity after deduction of interest cost (net spread)”.

Total revenue for the fourth quarter 2009 was USD287.6 million, compared to USD326.4 million for the same period in 2008. The decrease was mainly due to lower sales revenue, but partially offset by higher basic lease rents.

4Q2009 sales revenue reached USD115.9 million, down from USD170.9 million in 4Q2008, and was generated from the sale of eight aircraft, two engines and parts inventory. Sales revenue for four of the eight aircraft sold were sales of forward order positions.

Net spread (the difference between basic lease rents and interest expense, excluding the impact from the mark-to-market of interest rate caps) rose 44% to USD126.4 million in 4Q2009, reflecting the increase in leasing income. Basic lease rents for 4Q2009 were USD156.6 million, compared to USD134.7 million for the same period in 2008, while total lease revenue rose 11% year-on-year to USD165.7 million.

CFO, Keith Helming, added, “while global economic conditions have been weak, the year-over-year margin of net spread divided by average lease assets, which is a proxy for the lease margin, has improved. These improvements continue to validate AerCap's commitment to grow assets under management, while maintaining a commensurate return on investment, as reflected in our 2009 financial results."

Total assets were USD6.8 billion as at 31-Dec-2009, an increase of 25% year-on-year. During the fourth quarter, AerCap signed agreements for three separate debt facilities totaling USD484 million. This brings the total debt facilities arranged by AerCap during 2009 to USD1.7 billion, and USD5.0 billion during the last two years.

Mr Heinemann concluded, “AerCap is well positioned as the largest global independent aircraft leasing company to take full advantage of the industry recovery which is now well under way in most markets."

AerCap confirmed in its earnings report that all regulatory approvals have been obtained in relation to its USD1.75 billion acquisition of Genesis Lease and the registration statement was declared effective by the Securities and Exchange Commission (SEC) on 03-Feb-2010. AerCap stated, “transitional activities are on track and closing is expected on 25-Mar-2010”.

When the deal was signed in Sep-2009, the parties had hoped to close the transaction during 4Q2009. Under the terms of the amalgamation agreement, Genesis shareholders will receive one AerCap ordinary share for every Genesis common share they own. Genesis will become a wholly-owned subsidiary of AerCap. AerCap's Heinemann and Helming will lead the combined company, which will retain the name AerCap. 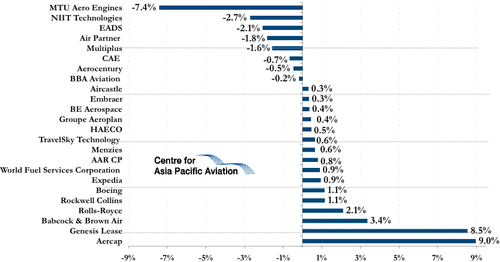