European airline shares fell for another day on Wednesday (11-Aug-2010) after the US Federal Reserve stated the pace of the economic recovery is now expected to be more modest than anticipated. Wider markets slumped as a result, with mining and banking sectors leading the fall.

The Office for National Statistics stated UK unemployment declined 49,000 to 2.46 million in the three months to Jun-2010, the largest drop since 2007. Employment increased 184,000 to 29 million, meaning employees were added at the fastest pace in 21 years.  The Nationwide Building Society reported UK consumer confidence declined in Jul-2010 for a third consecutive month.

Aer Lingus (-8.3%) shares suffered the biggest fall of the day on news its cabin crew have voted to work within their existing contracts of employment, despite management’s unilateral imposition of contract changes last month. The ballot outcome was 96% in favour to 4% against on a turnout of 67%.

Cabin crew union, IMPACT, will now serve Aer Lingus with official notice that staff will be working within their existing contracts with effect from 25-Aug-2010. The union stressed that its members were not on strike and would be working as normal prior to company management’s unilateral imposition of changes to contracts and working conditions. IMPACT says its members’ action will have no impact on flight schedules in and out of Ireland. The union says this will not change unless management escalates the dispute by taking disciplinary action against one or more cabin crew members for working within their contracts. It also repeated that it is available for talks with the company or industrial relations bodies.

Thomas Cook Group (-2.0%) also fell after the group reported a GBP116.6 million net loss for the three months ended 30-Jun-2010, compared with a net profit of GBP2.9 million in the previous corresponding period. The group stated that, excluding the impact of lost margin resulting from the volcanic ash disruption, underlying third quarter profits would have been up 10%.

TUI Travel (-6.5%) also continued to decline, after reporting a net loss of EUR36 million. However, this was narrower than its loss of EUR457 million in the previous corresponding period. 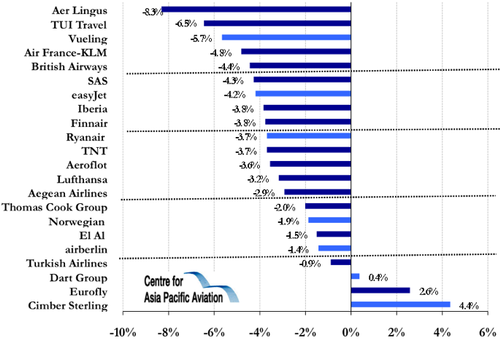