Aer Lingus shares soared 12.2% yesterday as the carrier highlighted further signs of stablisation on short haul sectors upon the release of the carrier’s 1H2009 financial results.

Elsewhere, shares in Air France-KLM gained 1.0% yesterday as the carrier announced that unit revenues, which are still under pressure, recorded a lesser decline in Oct-2009. The carrier released its traffic results for Oct-2009, showing a 5.3% year-on-year decline in passenger numbers to 6.3 million. Traffic declined less than capacity (-4.1% and -5.1%, respectively, compared to Oct-2008) and load factor gained 1.3 ppts to 82.5% in Oct-2009.

Shares in Finnair were flat upon the release of the carrier’s traffic highlights for Oct-2009. Finnair’s passenger numbers declined 11.6% year-on-year for the month, while cargo volumes increased 4.8% year-on-year. The carrier cut capacity in line with demand and produced a 6.3 ppts increase in load factor to 64.5% for Oct-2009.

Finnair’s SVP Communications, Christer Haglund, confirmed that “capacity was optimally cut to match falling demand. Winter is expected to continue to be difficult, so further adjustments to traffic will be made. For leisure traffic in particular, the coming winter season will be tough…The decline in cargo traffic, however, currently appears to be over”. 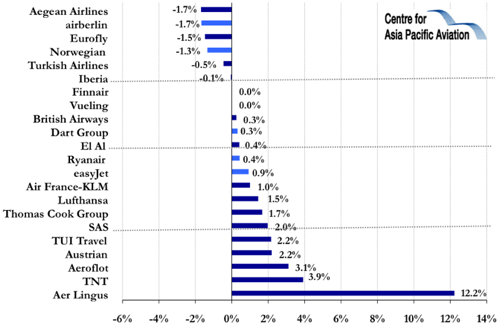