The majority of European airline shares were down on Friday (06-Aug-2010) as wider markets fell to their lowest close in a week. The fall was the result of reports that US employment falling for a second consecutive month in Jul-2010.

Aer Lingus (+1.5%) rose to its highest level since Feb-2009, as investors remain optimistic the airline will be able to continue introducing cost cutting measures. The airline has stated it will continue flying regardless of the result of its cabin crew ballot for strike action.

Norwegian Air Shuttle (+1.4%) was also up, after also reporting improved passenger numbers, while Vueling (-1.6%) fell on a decline in load factor for Jul-2010.

SAS (-0.4%) slipped, after Scandinavian Airlines’ yield fell 9.0% year-on-year for Jun-2010. Revenue per ASK (RASK) was also down for the month, falling 7.2%. The group stated its yield was affected by a mathematical routemix effect from the relatively strong performance on intercontinental routes versus short haul routes, one off adjustments of the frequent flyer liability but also due to overcapacity and price pressure in some markets. Its yield outlook for Jul-2010 is uncertain and indicates yield (change) in line with May-2010.

The group stated the pick up in both the passenger and cargo businesses continued in Jul-2010, both in terms of traffic and unit revenues. This improvement reflects both an upturn in demand as well as prudent capacity management. As in the previous two months, unit revenue per available seat kilometer (RASK) ex-currency saw a strong year-on-year rise, with a marked recovery in both Premium and Economy classes. 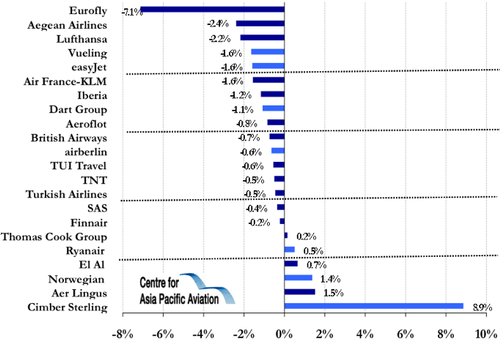