As anticipated by the company, Aer Lingus’ 2013 operating result was below that of 2012. The profit recovery from heavy losses in 2009 had been driven by mainly unit revenue growth, but, in 2013, RASK growth was outpaced by CASK growth. Unit revenues were particularly weak on short-haul in the second half of the year, reflecting fierce price competition in European markets. Strong growth in revenues from Aer Lingus’ new contract flying business helped, but not enough to drive earnings growth.

Against this backdrop, a concerted push on cost reduction is necessary and Aer Lingus has recognised this priority in a new profit improvement programme, dubbed CORE. Although revenue initiatives are also part of it, the weak pricing environment of 2H2013 underlines the need for a competitive cost base and CORE includes a EUR30 million cost reduction target over two years. With savings largely expected to come from the payroll, the quality of industrial relations will be a key feature in the programme’s success.

Aer Lingus’ net profit of EUR34 million in 2013 was almost identical to the result of 2012 (+0.6%), in spite of a 2.3% increase in revenues to EUR1,425 million. The operating result dropped by almost 12% to EUR61 million, with the operating margin slipping by 0.7 ppts to 4.3%. Although Aer Lingus originally expected an operating result in line with 2012, this outlook was lowered as a result of the intense price competition experienced in 2H2013. The result reported is consistent with the revised guidance.

The board is proposing to pay a dividend of EUR4 cents, the same as last year, and to maintain this level of payout into the future.

Steady profits since 2010 and a strong balance sheet

Aer Lingus has now remained in profit for four consecutive years. Although its operating margin slipped slightly in 2013, it has been fairly consistently in the 4% to 5% range since the company returned to profit in 2010.

This margin is lower than those recorded by the more successful LCCs such as Ryanair and easyJet, but compares favourably with many other legacy carriers. 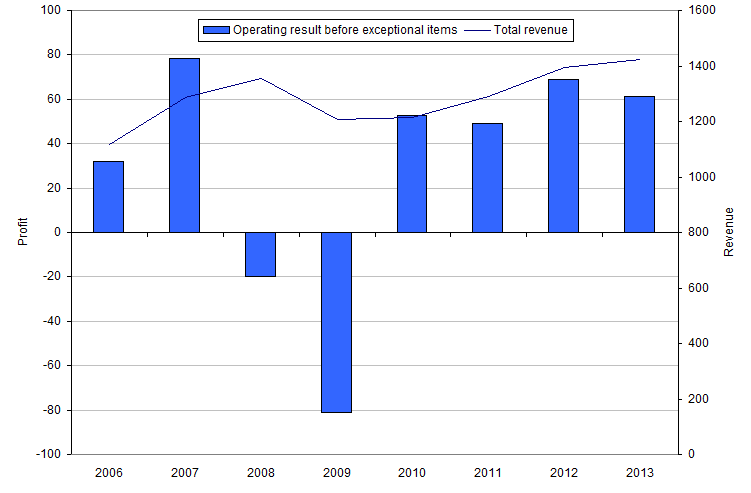 This combination of what appears to be steady profitability and a strong balance sheet positions Aer Lingus favourably to weather the competitive storms that consistently buffet it. 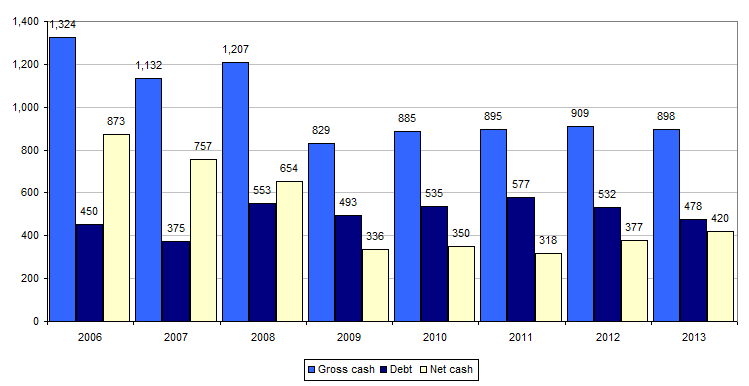 Aer Lingus’ return to profit in 2010, after a heavy loss in 2009, was partly driven by a significant capacity cut in both long-haul and short-haul 2010. Since then, long-haul numbers have returned to growth and 2013 numbers were 21% higher than 2010, while short-haul numbers were only 1% above their 2010 level. Long-haul expansion in 2013 was driven by the re-deployment of an additional A330, leading to higher frequencies on Dublin to Boston and Chicago.

Passenger load factor gained 0.7 ppts to reach 78.4% in 2013, an increase of 5.6 ppts versus 2008 (both parts of the network saw load factor gains). Nevertheless, it remains lower than the average level of 80% for members of the Association of European Airlines in 2013. CCO Stephen Kavanagh told analysts that capacity would be broadly flat in 2014 and that he was “happy with the network”. He said that the challenge in 2014 was to fill the seats more. 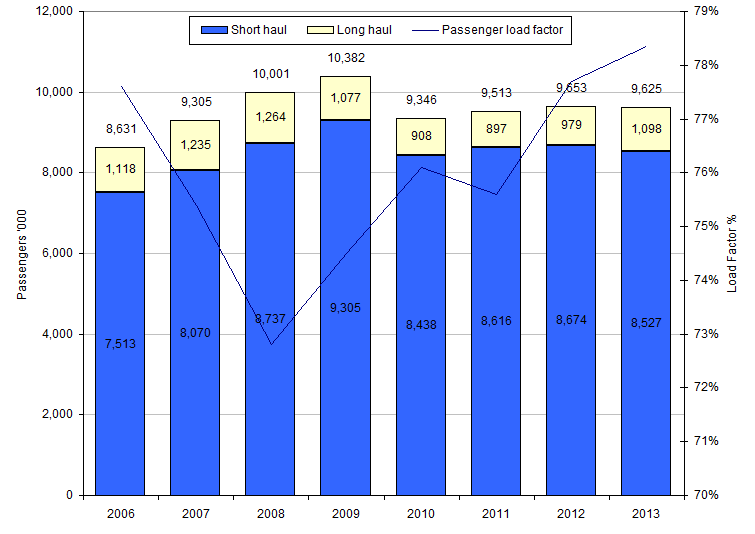 Revenue growth in 2013 driven by long-haul

Revenue growth of 2.3% in 2013 was mainly driven by long-haul revenues, which were up 11.1% to account for 27% of the total. Short-haul revenues dropped by 3.3%, affected by good weather in northern Europe during the summer and what Aer Lingus called an “increasingly competitive pricing environment” in 3Q and 4Q, but still represented more than half (55%) of the total. Retail revenues grew by 2.8%, ahead of the growth in passenger numbers, reflecting the impact of new initiatives such as pre-order, enhanced and refreshed meal offerings, wi-fi on long-haul and new checked baggage options.

The growth in ‘other’ revenues (up 160%) reflected Aer Lingus’ nascent contract flying business, including operating Virgin Atlantic’s UK domestic feeder services under the ‘Little Red’ brand and a long-haul service from Scandinavia to the Caribbean for tour operator Novair.

Analysis of fare revenues and yield per passenger: 2012 and 2013

Aer Lingus says it is discussing with Airbus revised delivery dates for the nine A350XWB aircraft on order as the original delivery dates cannot be achieved. It says it is likely that it will still take nine aircraft (a mixture of A350-900 and A350-900R), with deliveries over the period 2018 to 2020.

It also plans to start to evaluate its short-haul fleet rollover options but says, “this is not urgent given the relatively young age of our short haul fleet.”

Costs have grown faster than revenues

Operating costs increased by 3.0%, faster than the growth in revenues and passenger numbers. Fuel costs, accounting for 26% of the total, were just below flat (-0.4%) and non-fuel costs grew by 4.3%. Staff costs, which made up 20% of the total, increased by 4.0%. This was the result of additional headcount in the contract flying business and the long-haul fleet expansion.

The company’s voluntary severance programme, under which 199 out of 124 people had left Aer Lingus by the end of 2013, should have a cost benefit in 2014.

CASK grew faster than RASK in 2013

Aer Lingus’ profit recovery from the losses of 2009 was driven by unit revenues (total revenue per ASK, RASK), which climbed faster than unit costs (cost per ASK, CASK). In 2013, RASK growth slowed to 1.0% and, although CASK growth also slowed, it outpaced RASK growth (it was up 1.7%).

Contrary to the typical inverse relationship between unit costs and average trip length, Aer Lingus has seen two consecutive years of rising average trip length together with rising unit costs. At the same time, it has managed to increase unit revenues also, but the gap is narrowing. As experienced in 2009, any fall in demand leading to a drop in RASK would leave its profitability looking very vulnerable without a concerted push to lower unit costs. 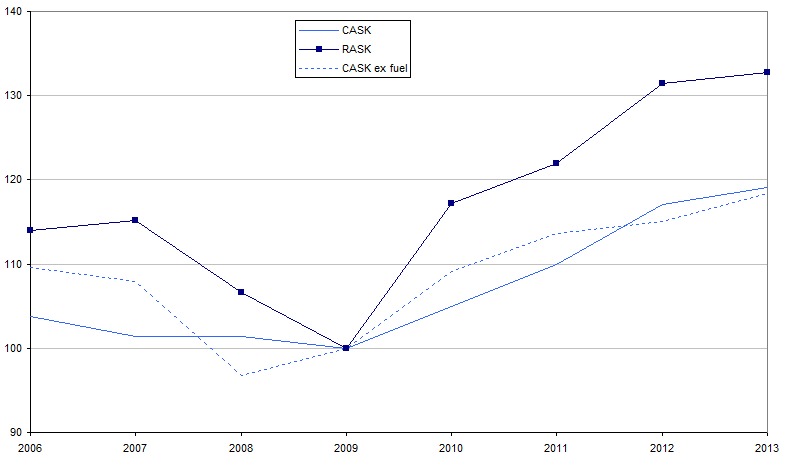 In 2014, Aer Lingus plans new services to Toronto and San Francisco, in addition to increased frequencies on its Shannon services to Boston and New York. These factors will contribute to long-haul seat capacity growth of 20% in 2014, brought about through the wet lease of three Boeing 757 aircraft from ASL Aviation Group. All trans-Atlantic services will enjoy full US Customs and Border pre-clearance in Ireland by the summer 2014 schedule.

The company says that forward bookings are currently ahead of last year and its new services are “performing in line with expectations”. Overall in 2014, it expects operating profit to be “broadly in line with 2013”, although it anticipates that the changed timing of Easter this year will make 1Q2014 weaker. Its three areas of focus for 2014 will be cost reduction, product/service improvement and selling the additional long-haul capacity.

Aer Lingus planned product and service improvements in 2014 and beyond 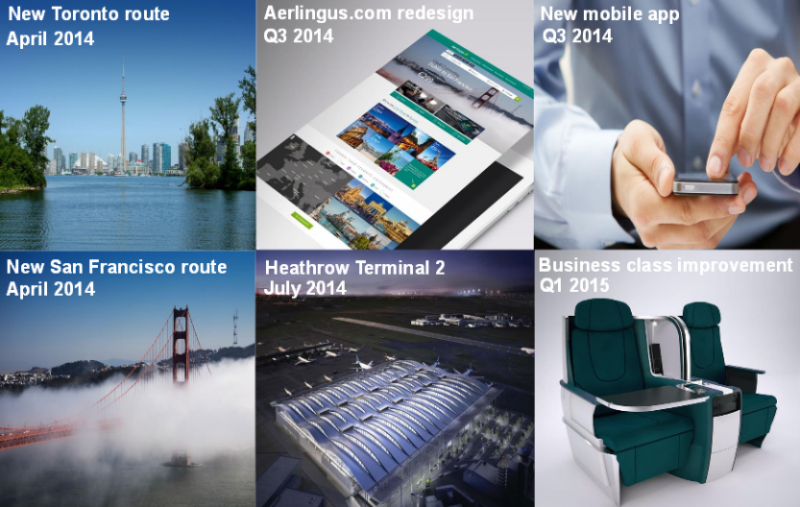 Costs are at the CORE

It is introducing a new two year business improvement programme, with the acronym CORE (‘Cost Optimisation and Revenue Excellence’). This explicitly recognises Aer Lingus’ need to have a cost base which allows it to be competitive on price, while maintaining its differentiation (eg from Ryanair). It includes a EUR30 million cost reduction target, of which “the lion’s share will come from the payroll”, according to CEO Christoph Mueller.

Of course, such programmes bring industrial relations challenges and a resolution of the outstanding pension dispute will be an important step in this respect. Members of the SIPTU union have voted in favour of industrial action related to pension matters and other unions are thought to be considering it, since they are not comfortable with Aer Lingus’ pension funding proposal.

Aer Lingus believes that the continued lack of a solution to the pension issue has held back its cost reduction efforts. Its decision to launch its CORE programme reflects management’s determination not to allow any further delays, although the current industrial relations backdrop is less than ideal for the programme.

As CAPA noted in our analysis of the Aer Lingus 2012 results a year ago, its creditable profit recovery since 2009 owes more to market-driven unit revenue recovery, albeit aided by some sensible management decisions, than it does to equally sensible action on unit costs. With unit revenue growth slowing significantly in 2013, this increases the need for ever more action on unit costs. Aer Lingus is right to press ahead with CORE.