European airline shares advanced on Monday (20-Sep-2010), despite a rebound in oil prices (+1.6%) to USD74.86. Airline shares were boosted by gains in the wider markets, after the National Bureau of Economic Research stated the US recession is well and truly over and concerns over euro zone sovereign debt were eased.

Aer Lingus (+5.7%) was one of the day’s biggest gainers, following news it has reportedly held informal talks with a number of competitors to purchase the Irish Government’s 25% stake in the airline. International Airlines Group (IAG), the holding company due to be formed from the merger of British Airways and Iberia, reportedly selected Aer Lingus as one of its potential acquisition targets. British Airways CEO, Willie Walsh, stated that IAG has identified 12 potential acquisition candidates.

Iberia (+1.8%) despite news Spanish unions, UGT and CC.OO, have requested permission to halt all international services from the country on 29-Sep-2010, due to a country-wide general strike over the government’s austerity measures and labour reform. Under Spanish law, transport workers must provide a minimum level of services, with unions and the government to agree on what these levels should be. Iberia stated it would contact affected passengers once minimum service levels are announced.

Also in Spain, Prime Minister, José Luis Rodríguez Zapatero, called for a new tax to be imposed on flights, under incentives to combat poverty. Mr Zapatero suggested that the additional charge on airfares could be voluntary, but that the money raised should go to development aid. He noted 12 countries have collected EUR160 million p/a from charges on international flights.

Lufthansa (+1.1%) was also up. The carrier reportedly plans to propose Christoph Franz – deputy CEO and CEO of Lufthansa's Passenger Division – as successor to CEO Wolfgang Mayrhuber at a supervisory board meeting on 22-Sep-2010. It has also been speculated that Mr Mayrhuber, whose contract ends at the end of 2010, may be asked to remain as CEO until the carrier's next shareholders' meeting on 03-May-2011. 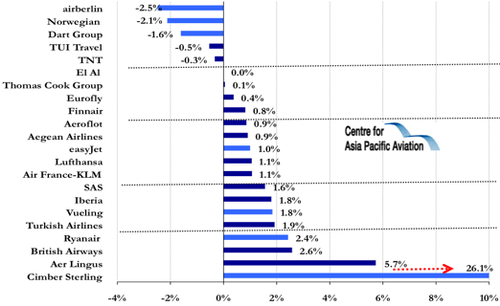