European airline shares were boosted by the wider markets’ first gain in three sessions on Monday (09-Aug-2010), as investors were relieved over improved European economic data and beliefs the US Federal Reserve will implement new monetary policy action. Germany reported a 3.8% year-on-year rise in seasonally adjusted exports for Jun-2010.

Aer Lingus (+0.5%) gained marginally after reporting a 3.5 ppt year-on-year rise in load factor for Jul-2010, to 85.8%. The improved load factor came as capacity was reduced on a planned basis, resulting in a decrease of 13.9%. Traffic meanwhile declined 10.2% over the period.

Lufthansa (+1.8%) was one of the biggest gainers in Germany’s DAX index for the day, with a trader telling Reuters, the gain was on the back of improved traffic results from Air France-KLM released the day prior. The trader stated investors are optimistic the trend will also be reflected in Lufthansa’s Jul-2010 traffic results.

Lufthansa’s stock is currently outperforming the STOXX Europe 600 index of travel and leisure.

Air Berlin (-1.0%) shares fell, despite the carrier announcing a number of new routes during trading. The LCC stated it will operate to Bari from three German airports (Cologne/Bonn, Munich, Stuttgart) in winter 2010/2011 and plans to launch a series of services to destinations in Italy, Spain and Austria. It also announced plans to make improvements to the hub structure at the airport of Palma de Mallorca, enabling expansion for the LCC at the airport, with more direct services to the Spanish mainland, Germany, Switzerland and Austria.

TUI Travel and Thomas Cook to report this week

Elsewhere, TUI Travel (+4.3%) was the day’s biggest mover, ahead of releasing its 3Q2009-10 financial results. Thomas Cook Group (+1.3%) is to report on Wednesday (10-Aug-2010). Analysts are concerned the results will be less than impressive due to weak consumer demand and the ash cloud crisis in Apr-2010. 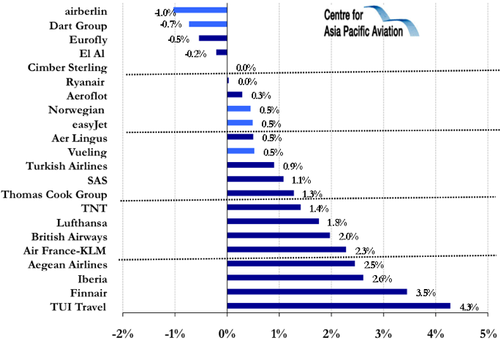