Investing in European airlines was a roller-coaster ride in the first half of 2010, with early signs of economic recovery giving way to significant volcanic ash-related disruption in April/May, uncertainty and losses, as well as rising concerns over Europe's indebtedness. Holders of Cimber Sterling shares would have lost 57% of their investment over the period, while investors in Jet2.com's parent, Dart Group, are sitting on a 41.4% gain.

Scandinavian carriers, SAS (-50.9%) and Cimber Sterling (-57.1%) shed the largest capital value in the first half of 2010, as highly competitive conditions in those markets, along with SAS’ ongoing cost problems, bit hard. Cimber Sterling contains the remainder of collapsed Sterling Airways, folded into the Cimber network and is still fighting to establish a new sustainability.

However, of the Nordic low cost carrier, Norwegian (-9.4%), and Finnair (+8.7%) fared relatively well for the six months.

At the other end of the scale, Jet2.com parent, Dart Aviation (also the owner of a logistics operation) performed best in the period, with its share price gaining 41.4%. The company contains operations which it maintains are complementary in their cyclical nature, so that, while the LCC component is currently flagging a little, the logistics side is performing well.

Aer Lingus (+25%) too has quietly made a recovery, generating good returns for anyone bold enough to buy when the airline was under fire in late 2009. And Iberia (+18.9%) has also had a good year to date.

Europe’s three major full service airlines, BA, Air France-KLM and Lufthansa have been less volatile. After a slide in late 2009, British Airways’ share price (+2.6%) has performed the best of the three in 2010 so far. Air France-KLM (-12.6%) and Lufthansa (-3.9%) both performed on the negative side of the ledger.

While the big LCCs have held up….

Europe’s largest airline, Ryanair (+2.1) has held its position and easyJet (+10.5%) gained well, despite tribulations along with the trial of a challenge from director and founder Sir Stelios Haji-Ioannou. Vueling (-30.6%), still digesting its clickair merger was a less profitable short term investment and evolving LCC, Air Berlin, has lost 16.4% of value since 01-Jan-2010. 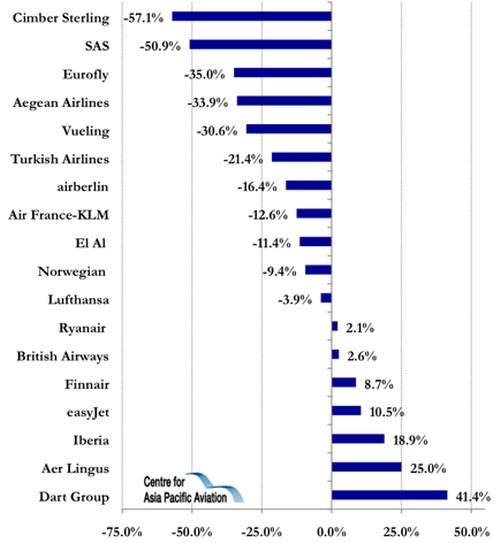 On 30-Jun-2010, most airline stocks suffered, despite the fact that European markets did not decline to the same extent as Wall Street. 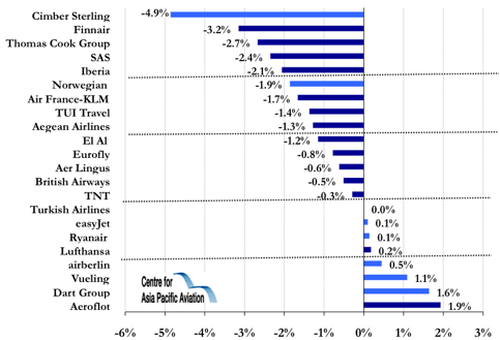