Aer Lingus expects to break even this year; SAS and Iberia slump

European airline shares declined again on Tuesday (24-Aug-2010) as wider markets fell to a one-month closing low. Airline shares were also down on reports of net losses from Aer Lingus and Air Berlin.

Aer Lingus expecting to break even this year

CEO Christoph Mueller attributed the improved performance to strong unit revenue growth coupled with a significant improvement in the carrier’s cost base. He added that despite the result, the group remains committed to implementing all aspects of its "Greenfield Cost Reduction Programme", "to position Aer Lingus for a successful future".

For FY2010, Aer Lingus now expects to report an operating performance (before exceptional items) of no worse than break-even. For FY2011, Mr Mueller stated it is too early to provide firm guidance, with yields and passenger numbers dependent on the economic outlook.

Bloxham Stockbrokers stated in a note that the carrier’s operating performance and “very strong” balance sheet shows a carrier “undergoing a fast recovery from the depths of 2009”.

Aer Lingus CFO Andrew Macfarlane, meanwhile, stated that due to its improving performance, there is “no reason why we shouldn't be able to remain independent”, adding that it may join one of the global alliances over the longer term.

Elsewhere, Turkish Airlines (+2.6%) and Dart Group (+0.4%) were the only carriers to gain for the day, with Turkish Airline shares benefiting from the carrier reporting a 181% increase in net profit for 1H2010 the day before. 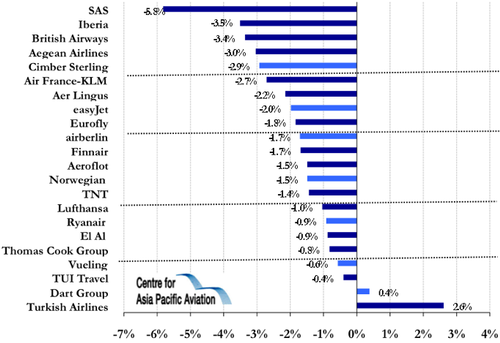