Aer Lingus (-2.6%) declined for the session, despite stating during trading that the group’s performance in 3Q2010, and Sep-2010 in particular, has been stronger than expected due primarily to improved yields. The carrier expects full-year operating profit, before exceptional items, to be at the top end of market forecasts with forward revenues for Oct-2010 and Nov-2010 ahead of expectations.

However, the carrier stated it shares the concerns expressed recently by IATA and other commentators that that the durability of the current aviation sector upturn is in increasing doubt in Europe and North America and that growth will slow in 2011. For Aer Lingus, weakness in North America and Europe would be further compounded by the weakness of the Irish economy. As a result, the carrier expects forward revenues for Dec-2010 and 1Q2011 to be weaker.

It added that the completion of the Greenfield cost reduction programme therefore remains vital if 2010 profitability is to be sustained into 2011 and for the longer-term.

Director General Temel Kotil stated during trading that the airline will focus on operations, flight quality and punctuality in 2011. Turkish plans to increase daily services from 750 per day to 1,000 and grow traffic by 20% in 2011.

SAS to expand route network in 2011

SAS (+4.7%) experienced the strongest gain of the day, after Scandinavian Airlines announced plans to expand its route network with two new long-haul routes to New York (to commence in Mar-2011) and Shanghai (winter 2011), stating the decision is due to "significantly reduce costs" and "improved market conditions" which are providing "greater prerequisites for a profitable expansion for SAS".

In addition, SAS will also launch a number of new European routes continuously during spring 2011, as well as significantly increased frequency across its key short-haul routes with 150 new weekly departures. In addition, four new routes will be launched: Oslo-Munich, Oslo-Palma, Oslo-Split and Stockholm-Venice. The carrier is adding one A340 during winter and another A340 next winter, bringing its long-haul fleet to 11, with the carrier also adding back in traffic three short-haul aircraft, previously leased out, during spring 2011. 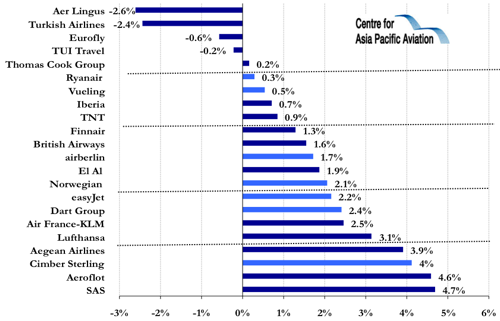