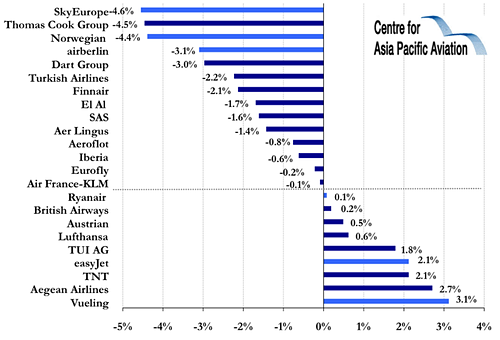 Aegean Airlines is to become Star Alliance’s next member, a process expected to take about 12 months. The regional carrier (A3) will be 10 years old on the 28th of May, making it younger than the alliance group that it is joining. It has grown rapidly and, as of 2008, became Greece's largest airline in terms of passengers carried, with 6 million passengers, an increase of 14% over 2007

The airline has been consistently profitable since 2003.  Star membership benefits will be from expansion of revenue streams rather than a reduction in costs.

Aegean has been a regional partner of Lufthansa since 2005 and its accession to Star was facilitated by that link. In 2008, its passenger traffic was roughly 60% domestic and 40% international. Currently Aegean serves 17 destinations in Greece and 18 foreign destinations with 8 other regional points under current consideration. The carrier operates a fleet of 31 aircraft with an average age of two years, covering a total of 47 domestic and international routes on 200 daily flights.

The addition of Aegean in the next few months, as well as the previously announced entry of Air India, SN Brussels, Continental and TAM will take the Star's membership from its current 21 to 26, making it by far the most inclusive and expansive of the three existing alliances.

Shares in the travel group fell again as 51% owner, Arcandor, its German based holding company, struggles to survive.  Arcandor has sought EUR650 in state aid from the German government, to keep the company solvent, but this is not likely to happen quickly, if at all.

The outcome could be a pressure sale of all or part of Thomas Cook Group, which inevitably weighs down the subsidiary’s share price.