Aegean Airlines shares drop as it reports another quarterly loss

Aegean Airlines has reported a net loss of EUR16.3 million before tax of 1Q2011 on revenue of EUR105.8 million. The result is a notable improvement on 1Q2010, when it reported a EUR25.6 million loss.

The airline, which cut capacity over the winter schedule, managed to reduce operating costs by 13%, excluding fuel. However, the 40% increase in the carrier's fuel costs resulted in an operating loss of EUR18 million. This was again significantly better than the same period last year, when it reported a EUR32 million operating loss.

Overall ASKs fell 7% in the quarter. Due to the capacity reduction, passenger numbers were down 15% year-on-year, with domestic traffic down 18% and international traffic falling 12%. RPKs fell by 7%.

The carrier is focussing on improving its competitiveness and more cost-containment efforts. It has dropped the Avro regional jets from its fleet and is now using an all A320-family fleet, the first time it has operated a single-type fleet. 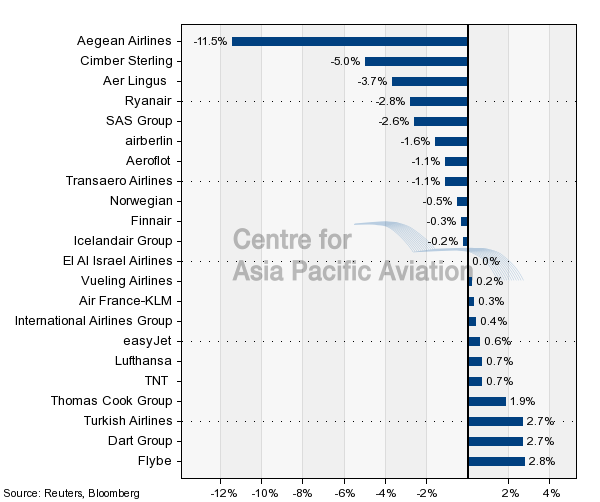