Greece’s largest airline Aegean Airlines reported a first half profit in 1H2013 for the first time since 1H2009, putting it on track to post its first full year profit since 2009. Aegean has laid down a good track record of cost control over a number of years, but unit revenue weakness has undermined this and led to annual losses.

The return to profit for the half year was due to strong growth in revenues, led by international routes and driven by a significant rise in RASK. Tight capacity management contributed to this performance and Aegean will be hoping that strong unit revenues can be sustained into the second half in spite of growing LCC competition.

Meanwhile, the European Commission is expected to rule on Aegean’s proposed acquisition of Olympic Air in Oct-2013 and this will be the key strategic milestone in 2H2013.

Passenger numbers grew by 3%, driven by international traffic, where passenger growth was 11%. Domestic passenger numbers fell by 5%. Aegean has not published ASK and RPK data for 1H2013, but ASK figures can be calculated from its published revenue and RASK data. Based on these calculations, ASKs actually fell by 1%.

Deriving RPK data from published figures for passenger yield and passenger revenues, we calculate that RPKs grew by 7% and load factor gained 5.2% to reach 74.6%. Aegean says that load factor on international flights increased by 7 ppts to reach 76%, which implies that domestic load factor declined.

Growth in international passenger numbers, which was 11% for 1H2013, was even stronger for the three month period May to Jul-2013, when it was 22%. Among Aegean’s five main bases, the strongest growth in these summer months was at the Greek island cities of Rhodes (41%) and Heraklion (31%). Among its other bases, Kos (also an island destination) and Kalamata also saw very strong growth. Strength in international passenger traffic reflects incoming leisure demand. 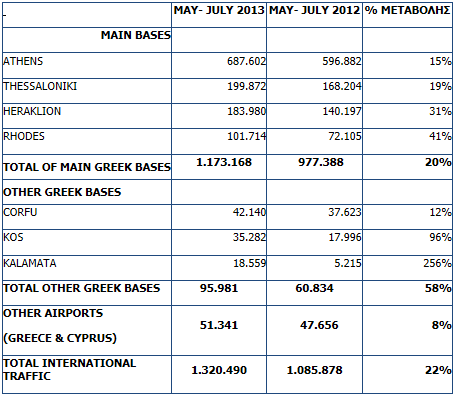 Revenues up 22% thanks to international routes

Aegean’s 22% growth in first half revenues was driven by scheduled flight revenues, which accounted for 84% of the total and were also up by 22%. Charter flight revenues grew more slowly, at 17%, and other revenue (including cargo and onboard sales) grew by 26%.

Revenue growth significantly outstripped growth in passenger numbers, partly reflecting longer average sector length (around 3%). However, with revenue per passenger up 18% to EUR100, this is not all due to growth in average journey lengths: increased load factors also played a part.

Nevertheless, Aegean notes that: “Another parameter that continues to generate challenges for the Company is increasing competition from the major European low-cost carriers.” LCCs’ share of international seats to/from Greece was 35% in the first eight months of 2013, up from just below 32% in 2012 and less than 5% in 2003.

Revenue growth was also considerably stronger than growth in ASKs, with RASK up 23%. If growth in RASK is maintained for the full year, this will be the first year of RASK growth since 2008. Although average sector lengths increased in 1H2013, the rate of growth was slower than the double digit rates seen in recent years and this in itself would reduce the downward pressure on RASK. Tight capacity management also seems to be contributing towards improved pricing power.

Aegean sees a positive outlook for the third quarter and expects to see further growth in international sales, with domestic routes continuing to shrink.

Operating costs fell by 4% year-on-year, helped by a 4% fall in fuel costs (the biggest cost category), itself mainly due to lower jet fuel prices. There were also reductions in both lease costs and labour costs. Aircraft lease expenses fell by 8% as a result of the renegotiation of terms with lessors in the second half of 2012. Labour cost reductions of 15% partly reflect the outsourcing of ground handling in 2012 and build on Aegean's already creditable labour productivity position relative to many other European airlines.

EC to decide on Olympic Air acquisition in mid Oct-2013

A decision by the EU’s Competition Commission on Aegean’s planned acquisition of Olympic Air is expected in mid Oct-2013. Aegean hopes that the acquisition, if approved, will allow it to offer comprehensive coverage of the domestic market and to improve international-domestic connectivity.

Olympic Air’s current shareholder, Marfin Investment Group, recently reported its results for 1H2013. The notes to its first half accounts reveal that Olympic lost EUR12.2 million in 1H2013, a narrower loss than the EUR21.6 million it lost in 1H2012. The combined revenues of Olympic Air and Olympic Engineering declined significantly from EUR83 million in 1H2012 to EUR56 million in 1H2013 (the significant majority of this is Olympic Air). The reduction in sales revenues and the narrowing of net losses at Olympic Air appear to demonstrate that network rescheduling, the removal of non-profitable routes and cost cutting measures are continuing to have an impact.

The domestic market is where the European Commission’s investigation is focusing its attention, although it is little more than one quarter of the size of the international market to/from Greece (by seats). LCCs currently have only around 2% of the domestic Greek market (Jan to Aug-2013), but this has doubled from 2012. If Aegean is prevented from carrying out the acquisition of Olympic, this could further open up opportunities for LCCs, who already have a strong presence in international markets to/from Greece.

Aegean is also number one in the international market, but it only has 16% of seats, while Olympic is number 25 with a share of 1%. LCCs take a large number of places among the top 10 international airlines in Greece.

The proposed Olympic deal would considerably strengthen Aegean’s position in the domestic market, but it risks being diluted or even prevented by the European Commission. It is unlikely to have a significant direct impact on Aegean’s position in international markets, where LCCs continue to build on their unit cost advantage and FSCs offer superior global connections (although Aegean’s membership of the Star Alliance is an asset in this latter respect).

However, the acquisition would provide a strong domestic basis and keeping LCCs out of the domestic market would be indirectly positive for Aegean’s international position.