The majority of European carriers gained on Tuesday (23-Mar-2010), moving higher with wider markets. Shares were boosted by a rebound in resources stocks, as well as an upbeat outlook from Cairn Energy and improved financial results from Legal & General. In key markets, UK’s FTSE (+0.5%, to a 21-month high), France’s CAC (+0.6%) and Germany’s DAX (+0.5%) all ended trading higher.

The carrier attributed the decline in net profit to the European recession and specifically, during the last four months of the year, the deteriorating economic environment in Greece. Rising seat capacity offered by competitors both domestically and internationally combined with weak consumer confidence and declining demand put further pressure on average fares. These pressures were only partly offset by the cost benefits from the fleet renewal programme.

Managing Director, Dimitris Gerogiannis, stated the conditions the carrier is facing for 2010 are “even more difficult, given the deteriorating economic conditions in Greece”. Within Greece, the carrier’s target is to ensure its long term prospects through effective cost management, maintaining service quality while increasing fare attractiveness and gaining local and international and local cooperation. Aegean announced merger plans with Olympic Air in Feb-2010.

Aer Lingus (+4.2%) was the day’s biggest gainer. IMPACT Union stated during trading that the carrier’s cabin crew have agreed to hold a second ballot on a EUR97 million cost-cutting plan. Crew members initially rejected the plan, which included up to 600 voluntary redundancies, pay cuts of 10% and a three-year pay freeze. However, the plan would avoid the loss of 230 jobs at the carrier.

British Airways' (+2.7%) shares were also up, following the first day back from the initial phase of cabin crew’s strike action. BA stated the carrier performed well over the weekend, and has now released an increased schedule for the second phase of the strike this weekend (27-Mar-2010 to 30-Mar-2010), due an "increased number of staff wishing to work as normal". The carrier plans to run a full operation using its own aircraft at London Gatwick, while all flights to/from London City will remain unaffected. At Heathrow, the airline will extend its schedule to include up to 55% of short-haul flights and 70% of long-haul flights. 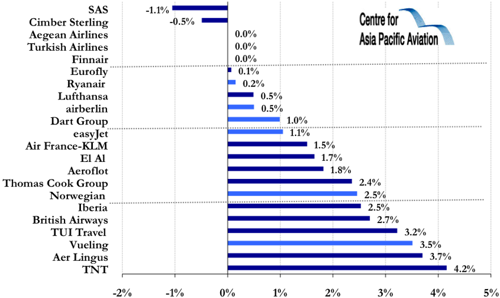