In recent decades, Greece has been a relatively stable nation with a very unstable airline. Once Olympic Airlines collapsed, it appeared that Aegean Airlines would restore stability to the sector, and meanwhile instability confronts the country. Now Aegean's status is being challenged as seven years of profitability turn into losses and the carrier pins its future hopes on a merger with the other Greek airline, Olympic, a vestige of the former flag. But now the European Commission has raised doubts about the prospects of the merger being able to meet EU competition standards.

Since Icarus, the history of Greek aviation is not one of stunning successes. The first airline, founded in 1930, promptly went bankrupt. Subsequently, a number of carriers emerged but none did well and in 1951 they were merged into a single company which lasted until 1955 when it, too, failed.

The carrier was revived again in 1956 through an agreement to sell the company to Aristotle Onassis, who had famously made a maritime fortune. The airline was renamed Olympic Airways in April 1957 and began its expansion across the globe.

With a growing Boeing fleet, the airline added routes to North America, Africa and then continued on to Asia and Australia. With Onassis’ marriage to Jacqueline Kennedy, both the man and the airline occupied high profile positions. However, following the death of Onassis’ son in 1973, and his death two years later, the airline’s shares were sold back to the Greek state which, in retrospect, was not a wise choice.

Nationalisation was not a good move for Olympic

Soon the poor financial performance forced routes to be cut and the next 20 years saw constant upheaval and financial loss. Despite numerous plans and management overhauls, the deficits remained constant, and as the airline entered the 21st century, financial results worsened. Still the flag carrier sought out the extensive Greek diaspora at all points of the globe - but they unfortunately were unprepared to pay premium fares and Athens never quite made it as a European hub, despite its solid geographic position. This route map, from a 1985 OAG Guide, shows the substantial (and constantly changing) network that Olympic operated. 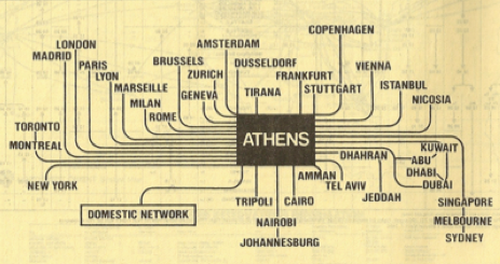 As the decade unfolded, the battles and court cases between the airline and its government over funding, payments and subsidies became chronic, and repeated attempts to sell the carrier or find new investors all failed. A change of name from Olympic Airways to Olympic Airlines in 2003, following yet another restructuring, did little to improve the airline’s situation. The company also encountered problems with the EU over subsidisation, which made financial health all the more complex to achieve.

Re-privatisation the last resort, with (old) aircraft now for sale

Operational instability increased as the decade progressed and in March 2009, state ownership ended with the sale of most assets, and the name, to the Marfin Investment Group, a Greek investment fund. In September 2009, the aged and ailing Olympic Airlines ceased to operate. The new company, Olympic Air, began flying a smaller network on 29-Sep-2009 under a similar name. On December 31, 2009, the old Olympic Airlines finally disappeared completely. Olympic Air now holds itself out as the largest Greek carrier by destinations served, but is a much smaller operation than its earlier namesake. 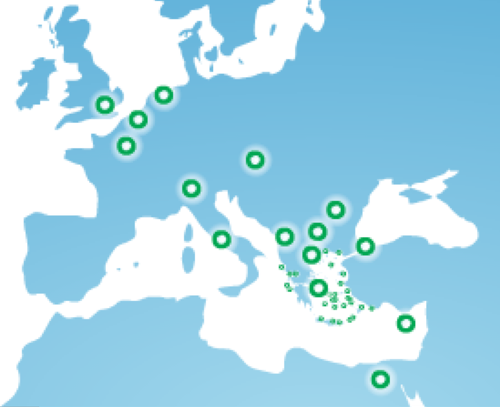 Meanwhile, Aegean had begun to emerge

As Olympic was sinking deeper into deeper debt and problems, a new player had begun to emerge. In 1992 Aegean Aviation became the first private airline with a Greek operating certificate. Two years later Aegean Aviation was united with the Vassilikas Group to operate worldwide charter flights using a newly-acquired Lear jet.

In Mar-1999, Aegean Airlines was established, and took delivery in May-1999 of two Avro RJ- 100s, beginning domestic flights in Greece. At the same time, others were looking to enter the market. Air Greece, a small domestic upstart, failed and was acquired by Aegean. International service was achieved through a joint venture with Cronus Airlines, also eventually absorbed by Aegean, along with its B737s.

Business Class on international flights appeared in late 2001 and the airline continued to add both domestic and international network points. In 2005, the airline decided to focus its fleet renewal on the A320 and began to add Airbus aircraft to supplement its Avro fleet, retiring the B737s.

By 2007, the airline was listed on the Athens Stock Exchange, but remains controlled by the Vassilakis and Laskardis groups. Within a year, in 2008, the carrier became Greece’s largest airline, expanding into Olympic's vacuum. Aegean joined the Star Alliance in Jun-2010. 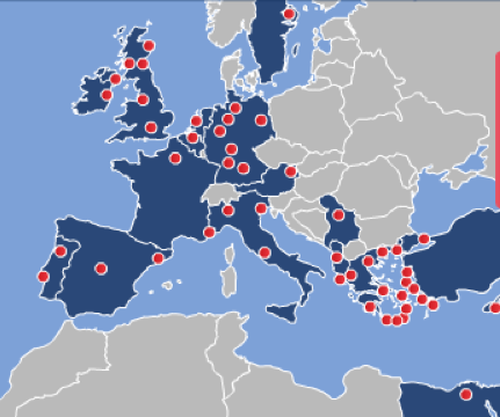 The carrier's financial prospects for the balance of 2010 are not good.

Greece is a small nation of 11 million people and one with newly imposed fiscal restraints that will cut disposable income for its citizens. And there is plenty of competition at Greek airports, with most legacy carriers offering service to global points as well as a growing number of low cost European challengers.

Nonetheless, Aegean has accounted for most of the growth at Athens in recent years and has created a network that now serves 19 out of the top 30 travel markets. In Feb-2010, despite previously rejecting the prospect agreement was reached for Aegean to merge with the new Olympic Air and add the Marfin Group to Aegean’s share-capital base. The result would be to create a a single Greek operator that will carry the Olympic name.

The proposed merger would see Olympic’s Marfin owners and Aegean’s main shareholder, Vassilakis Group, each with an equal shareholding of 26.6% and the balance mostly held by Aegean’s owners. Aegean would retain almost three quarters of the new airline’s stock.

However, recent statements from the EU indicate that this process of approval may take longer and require more effort that was initially estimated, if indeed it is approved. Meanwhile, operating conditions are deteriorating. Last week the Commission announced that a preliminary inquiry found a merger could “raise serious competition concerns", and said "the merged entity would have very high, if not monopolistic, market shares on all domestic routes and on a number of international routes where both parties operate."

If the merger is approved, there will be substantive differences from the earlier Olympic Airlines that operated unprofitably across a far-flung global network. At least that is certainly not part of current plans. The strategy for the airline's private owners is to stay closer to home.

During the past winter schedule, the airline added Madrid, Tel Aviv, Belgrade and Vienna, but the challenges ahead in 2010 mean that consolidation, rather than further expansion, is the main goal - although integration and consolidation will also bring further tests.

And a different, more modest - but profit driven - goal

Over the next few years as a sick Greek economy restructures, Aegean's strategy will be to focus on short haul operations with its own metal, while relying on its Star partners for wider links. In a more commercial world, and with the strictures of European competition laws to prevent government support and uneconomic operations, this model conforms much more to a modern airline role than the former Olympic's carrying the Greek flame around the globe.

Meanwhile, as Aegean awaits EU approval for a merger with Olympic, the outlook remains distinctly cloudy. Competition from slimmer, more aggressive airlines is unlikely to go away and the months ahead will be crucial to the future of the Greek aviation industry.